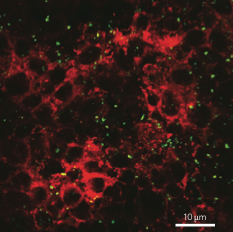 Provided
An intestinal cell monolayer after exposure to nanoparticles, shown in green.

Billions of engineered nanoparticles in foods and pharmaceuticals are ingested by humans daily, and new Cornell research warns they may be more harmful to health than previously thought.

A research collaboration led by Michael Shuler, the Samuel B. Eckert Professor of Chemical Engineering and the James and Marsha McCormick Chair of Biomedical Engineering, studied how large doses of polystyrene nanoparticles -- a common, FDA-approved material found in substances from food additives to vitamins -- affected how well chickens absorbed iron, an essential nutrient, into their cells.

The results were reported online Feb. 12 in the journal Nature Nanotechnology.

The researchers tested both acute and chronic nanoparticle exposure using human gut cells in petri dishes as well as live chickens and reported matching results. They chose chickens because these animals absorb iron into their bodies similarly to humans, and they are also similarly sensitive to micronutrient deficiencies, explained Gretchen Mahler, Ph.D. '08, the paper's first author and former Cornell graduate student and postdoctoral associate.

The researchers used commercially available, 50-nanometer polystyrene carboxylated particles that are generally considered safe for human consumption. They found that following acute exposure, a few minutes to a few hours after consumption, both the absorption of iron in the in vitro cells and the chickens decreased.

But following exposure of 2 milligrams per kilogram for two weeks -- a slower, more chronic intake -- the structure of the intestinal villi began to change and increase in surface area. This was an effective physiological remodeling that led to increased iron absorption.

"This was a physiological response that was unexpected," Mahler said.

Shuler noted that in some sense this intestinal villi remodeling was positive because it shows the body adapts to challenges. But it serves to underscore how such particles, which have been widely studied and considered safe, cause barely detectable changes that could lead to, for example, over-absorption of other, harmful compounds.

Human exposure to nanoparticles is only increasing, Shuler continued.

"Nanoparticles are entering our environment in many different ways," Shuler said. "We have some assurance that at a gross level they are not harmful, but there may be more subtle effects that we need to worry about."