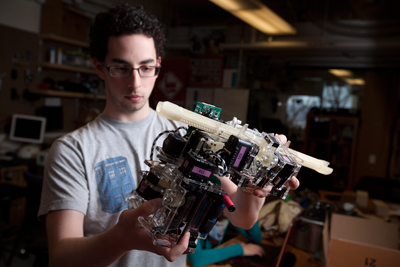 Like something straight out of "Star Wars," armies of robots could nimbly be crawling up towers and skyscrapers to make repairs in the not-so-distant future, so humans don't have to.

That's just one thing researchers in Hod Lipson's Creative Machines Lab envision with their latest robot prototype. It can autonomously traverse and manipulate a 3-D truss structure, using specially designed gears and joints to assemble and disassemble the structure as it climbs.

The robot's design is detailed in a paper accepted by IEEE Robotics and Automation, to appear later online and in print. Its co-authors include former visiting scientist Franz Nigl, former visiting Ph.D. student Shuguang Li, and undergraduate Jeremy Blum '12.

"Here, we are exploring the idea of machines making structures larger than themselves," said Lipson, associate professor of mechanical and aerospace engineering and of computing and information science.

The project is part of a National Science Foundation Emerging Frontiers in Research and Innovation grant jointly awarded to Lipson at Cornell, Daniela Rus of the Massachusetts Institute of Technology, Mark Yim of the University of Pennsylvania, and Eric Klavins of the University of Washington. The project explores the idea of automation of construction processes in uncertain conditions.

"What gets me most excited is this idea of safety," said Blum, a student researcher working on the project. Having a robot able to climb and reconfigure building structures, even just to deliver materials, would be a step toward making construction zones safer for humans, he said.

Furthermore, the researchers point to space-exploration applications. Instead of sending astronauts out on a dangerous spacewalk at the International Space Station, a robot could be deployed to repair a damaged truss.

Cornell's test robot has gone through several design iterations. The latest one employs 3-D printing to make a bi-directional gearing system that allows the robot to lock onto pieces of the truss with several degrees of freedom in movement.

The design of the truss pieces, which have ridges and specially designed locks so the robot can manipulate them, is as important as the robot itself, Blum explained. Ideally, in the future such robot-friendly building components would be standardized for widespread use.

The robot is equipped with an onboard power system, as well as reflectivity sensors so it can identify where it is on the structure. This allows it to maneuver accurately without explicit commands, Blum added.

Lipson said he envisions transforming the built environment with the help of these kinds of technologies. Instead of making buildings out of concrete or other non-recyclable materials, components designed specifically for robots could be used to build or reconfigure structures more efficiently -- for example, after an earthquake, or if an outdated building needed to be torn down in favor of something better. While the short-term investment in materials would be more costly, the longer-term ability to reuse and adapt these materials would be worthwhile, he added.

"Right now, we are very bad at recycling construction materials," Lipson said. "We are exploring a smarter way to allow the assembly, disassembly and reconfiguration of structures."