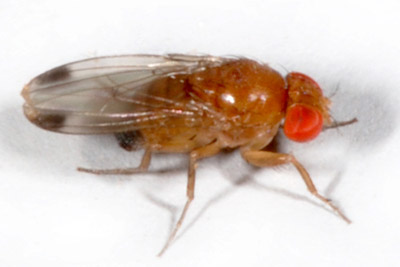 Martin Hauser
The male spotted wing drosophila, Drosophila suzukii, can be identified by the dark spots near the tips of its wings. 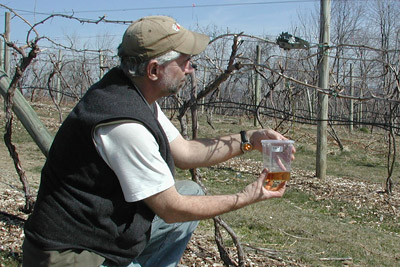 Late last summer, a single fruit fly dropped into a vinegar trap in the Hudson Valley, alerting extension specialists to spotted wing drosophila's (SWD) arrival to New York state. This tiny fruit fly may spark big changes for growers of berries and other soft-skinned fruits in the Northeast this summer.

"Based on what is occurring in places like Michigan and North Carolina, I expect the SWD to be a serious issue for small fruit growers in New York," said Cornell professor of entomology Greg Loeb. "Until now, we have not had to spray a lot of insecticide on our small fruit crops, but SWD could be a game changer for pest management."

An Asian native, Drosophila suzukii first appeared in California in 2008 and subsequently became established in the Southeast. Hurricane Irene is credited with helping it expand northward last year to the Hudson Valley, Finger Lakes and Long Island.

According to Loeb, summer fruits with soft skins are at risk, including raspberries, blackberries, blueberries, sweet cherries and strawberry varieties, which produce fruit through late summer. Grapes are potentially at risk, but they do not appear as vulnerable as the others.

Although the SWD are small -- about the size of common kitchen fruit flies -- their damage to crops can be massive. Adult females use specialized, serrated ovipositors to stow their eggs beneath the fruit skin. The maggots that subsequently hatch from them destroy the fruit's commercial value.

"The punctures from egg laying are so small that they will be hard for growers to spot with the naked eye," Carroll said. "Growers will likely first notice infested fruit, which will develop darker, soft regions as the SWD develop."

Monitoring is the first line of defense, according to Peter Jentsch, senior extension associate in entomology at the Hudson Valley Laboratory in Highland, N.Y.

"It's crucial to determine the earliest appearance of SWD adult females to prevent the onset of egg laying," Jentsch said. "With only 10 to 15 days from egg to egg-laying adulthood, populations can erupt very quickly, making them difficult to control as harvest approaches."

According to Carroll, two insecticides have been granted special approval for use this season, including one for organic production. However, guidelines for spray regimes will likely evolve over the growing season, in part because the newcomer harbors some secrets. For example, although the insects are presumed to be present all summer, they don't show up in traps until late summer or early fall. In addition, sprays must be carefully timed to target the adult stage, because the eggs and worms are shielded by the fruit.

"What's most important is for growers to be tuned in to their Cornell Cooperative Extension specialists and extension entomologists, because there is a lot we will learn as the season progresses," Carroll said.

Researchers plan to use this growing season to learn as much as they can about the SWD. Loeb and collaborators have initiated five local and regional research projects to better define effective control, including trials to test pesticide efficacy, monitoring to determine what crops are most at risk, and alternative approaches to managing SWD populations, such as "attract and kill" traps and repellants.