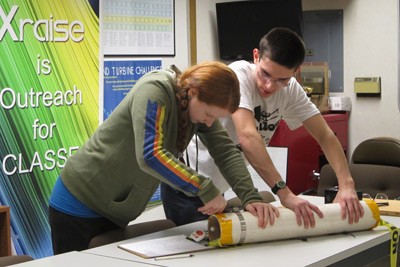 The Junk Genies grew out an effort to launch a summer enrichment program for GIAC students last spring.

"During the summer months, students don't really have enrichment programs in science or engineering. Most camps are recreational or art and music oriented," said Lora Hine, director of educational programs at the Cornell Laboratory for Accelerator-based Sciences and Education (CLASSE). "Cal Walker, the liaison between Cornell and the Ithaca City School District, suggested that we contact GIAC with our ideas."

Two programs evolved: Junk Genies and Garbage 2 Gadgets, in which students both during and outside of school construct contraptions out of everyday objects, such as cups into working headphones and cardboard folders into photon-powered video cameras. The programs are part of Xraise, the outreach arm of CLASSE, which also hosts teacher development workshops and a summer camp to make science appeal to children. One key aspect of the Junk Genies program is that children are encouraged to problem-solve to reach an end goal.

"One of the constraints that can become an asset is that the kids have to construct things out of the materials available," said Erik Herman, education and outreach coordinator for CLASSE.

Examples from a December exhibit of Junk Genies include how transparent film, shaped like a flower, between polarizers can show how interfering light waves make a rainbow. Another is how a noble gas can be illuminated by the energy of invisible electromagnetic waves, as displayed in a cardboard "microwave oven."

"We've looked through a lot of science exhibit videos, and the kids pick up on the ones they're most interested in, and from there, they select their project," Hine said. "We try to find a happy medium between the resources we have and what the kids want to build."

"Lora and Erik had us build some of the stuff the kids would build," Claypoole said. "I thought it was so much fun that I wanted to help out with it."

The Junk Genies are currently working on the exhibits they will display at the Ithaca Sciencenter, March 17 at 2 p.m. These will include a human battery, a Van de Graaff generator and a fog tornado, Claypoole said.

"We want to have kids build something they can be proud of," he said. "It's a really fun thing to do and is very rewarding. And if we can get them interested in science in the process, it's rewarding for us."

Another upcoming Xraise project is the Wind Turbine Challenge March 10 at the eXploration station, where adults and children of all ages can design a wind turbine with inexpensive materials. Completed designs will be judged on Earth Day (April 22) at the Ithaca Children's Garden.