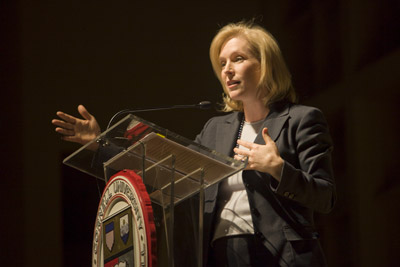 In a visit to Cornell March 2, U.S. Sen. Kirsten Gillibrand (D-N.Y.) advocated for the increased representation and empowerment of women in politics as well as in engineering-related fields.

In her keynote address at the 22nd annual meeting of the Presidentʼs Council of Cornell Women (PCCW) in a packed Statler Auditorium, Gillibrand cited her own career in arguing that greater capital and opportunity be provided to women, who represent "some of the most significant untapped potential in our country."

Noting that both small businesses and careers related to science, technology, engineering and mathematics (STEM) fuel a growing portion of economic growth, Gillibrand said that one way to encourage more women to choose STEM majors is to educate girls from a young age of the potential to improve their communities and local economies through engineering-related fields.

As an example, she related an encounter with a municipal sustainability engineer at an economic roundtable in upstate New York, who entered a STEM field when she realized she could help her community thrive by focusing on clean air, clean water and sustainable development.

Women succeed in fields where strong female role models exist, Gillibrand said. In her political development, she said, she was deeply influenced by her grandmother, a grassroots organizer in Albany, as well as by U.S. Secretary of State Hillary Clinton, who crusaded internationally for women's rights while she was first lady.

"One lesson I learned from them was that women's voices matter, that women actually make a difference when they are heard," said Gillibrand, who has served as a New York senator since January 2009. "What you choose to get involved in really can make a difference. [But] the more important lesson is to not be afraid to put your voice out there."

It was this principle, Gillibrand said, that encouraged her to leave a job as a securities lawyer in 1999 to work under Andrew Cuomo, then the secretary of the U.S. Department of Housing and Urban Development and now New York's governor. It was also a message that, in 2006, gave her the strength to successfully run to represent New York's 20th Congressional District, where, she said, "there are more cows than Democrats."

One of Gillibrand's initiatives as a senator is to spur more women to enter politics, she said. Women comprise only 17 percent of Congress and hold six governorships, and this, she said, "is not good for our country."

"If you're going to focus on core common shared values, you can in fact get things done in Washington," Gillibrand said. "Women are often the ones who will reach across party lines, who seek and want to build consensus, who listen well and realize what we need to do to come together. I can agree with Senators Olympia Snowe or Susan Collins (both R-Maine) on any issue."

This greater commitment to consensus, which Gillibrand especially noticed during her bipartisan championing of bills to help 9/11 first responders suffering from cancer and the repeal of the military's "Don't Ask, Don't Tell" policy has only convinced her of the importance of a female presence in all levels of politics.

"During World War II, we were asking women to enter the workforce because we needed them," Gillibrand said. "Six million women rolled up their sleeves to work, and that forever changed the economy and women's role in America. I would love a call to action that encourages 6 million more women to vote tomorrow than today. That would make a huge impact."

On March 3, U.S. Rep. Kathy Hochul (NY-26), also addressed the PCCW membership, speaking on "The 2012 Election Year: What's at Stake for Women, and How Women Elected Officials Will Make a Difference."

PCCW is a group of highly accomplished alumnae working to enhance the involvement of women students, faculty, staff and alumnae as leaders within Cornell and its many communities.