In 1981 my then-husband and I decided to leave our Manhattan apartment on the busy corner of 61st Street and Second Avenue. We had watched our local farmers' market on 59th give way to make room for construction of the Roosevelt Island Tramway, so we decided that Roosevelt Island was the logical place for us to look. On our first foray to the island my daughter, age 2½, looked up from her stroller and asked in a bewildered tone, "Where are all the peoples?"

Where were all the peoples indeed! I worried as someone who loves the city and its busyness if I would transition happily to this quiet spot. But from the first day of my life here I was thrilled: It was clean, quiet, and in the early days, especially, the island had a bounty of beautiful green spaces for kids and adults to wander in and enjoy. Soon I was to discover the air is fresher, our snow is cleaner and stays longer, and crime is rare. (In fact years ago a purse-snatcher was apprehended wandering the north end of the island trying to figure out how to get off this thing.) I didn't miss having lots of peoples after all. 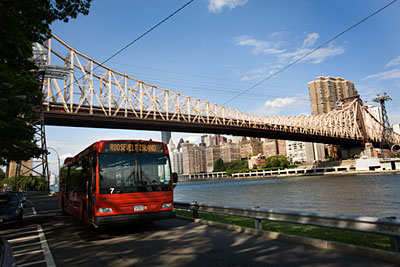 Roosevelt Island and Cornell -- which, before long will begin establishing its new tech campus on the island -- have some interesting things in common. The original residences, built in the mid 1970s under the Mitchell-Lama program, were designed to provide housing for a wide swath of socio-economic groups and not coincidentally to establish a comfortable place for people of all racial and ethnic backgrounds. Accordingly, the many-winged residential building, Eastwood, was heavily subsidized, and the buildings on the west side of the street (Westview and Island House) had not-unrealistic rents for middle-class residents. In time, Eastwood was transformed by a private owner into Roosevelt Landings with updated kitchens, bathrooms and, sadly, rents.

Although the Island has long had a bridge to Long Island City, Queens, our primary transportation for over a decade was the tramway. Our dependence on it was annoying when a mechanical problem or lightning temporarily suspended operation and forced us to beg a cabbie to take us home. But commuting aloft four minutes each way afforded us the chance to meet our neighbors and develop what we called "tram relationships." Today, we also have the choice of the subway though no "subway relationships!" 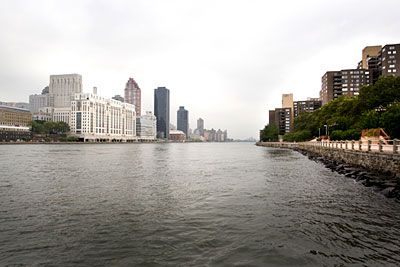 In 1989 new buildings arrived: four rental buildings, called Manhattan Park, and a building for low-income residents north of the original village and across from the garage, post office and supermarket.

The Octagon Building on the north end of the Island has two new wings that contain 500 apartments with mostly young, affluent residents. In its previous incarnation, the Octagon was the very same insane asylum that sent Charles Dickens running back to England appalled at what he had seen in the United States. The asylum's octagon tower burned in the 1980s, but it has been restored and is worth a trip north to have a look, along with the lighthouse and the swirling waters of Hell Gate that surround it.

Like Cornell, Roosevelt Island has a strong international history. Residents have included numerous United Nations employees, attracted by the European-like setting and reasonable rents. The tram and our elevators are filled with a multitude of languages, and my children grew up accepting the rich environment of Muslim people and traditions (they have pretty much always known what Ramadan is), Asians, Europeans, Africans, Latin Americans -- the list goes on.

The former resident who gives us the most pride certainly is Kofi Annan, who, before he became the U.N. secretary general, lived in Island House where his Swedish wife could often be seen waiting, in jeans and a T-shirt, on the building steps for her husband's return.

In spite of new buildings and a population that has grown to nearly 14,000 from 8,500, we remain a small enclave in a huge city. But we are thrilled about the big change coming to transform the southern part of our island. It has put little Roosevelt Island in the news and we are enjoying the buzz. We cheer the arrival of CornellNYC Tech, the people it will bring -- and the fact that having it here is making our home island suddenly seem very cool.

Janet Spencer King '64 is a writer, editor and editorial consultant and is president emerita of Cornell's Class of 1964.