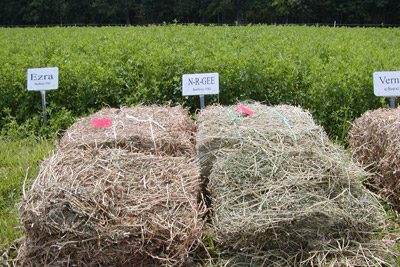 Dairy farmers could see a boost in milk production, thanks to a new alfalfa variety to be released by Cornell's world-class plant breeders.

The new variety, N-R-Gee, is highly digestible, is well adapted to the Northeast and is predicted to increase milk production up to 3.3 pounds of milk per day compared with an industry standard, said Julie Hansen, a senior research associate in plant breeding and genetics. 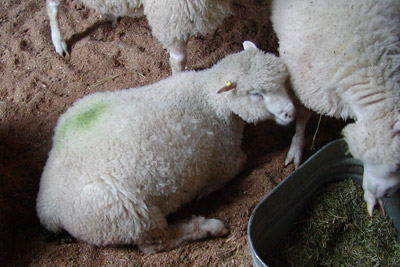 Provided
Lambs that were fed the N-R-Gee hay and monitored as part of the experiment.

The secret to N-R-Gee is a lower percentage of indigestible fiber -- which fills a cow's belly but passes through as waste -- and a higher percentage of carbohydrates and pectin, which cows can convert to milk. With less fiber taking up space in all those stomachs, cows can eat more of the high-quality alfalfa and produce more milk.

"More intake and more digestibility: those two things combined, we think, are going to make a pretty significant impact for the dairy industry," Hansen said.

N-R-Gee has already soared through one test, on 3-month-old lambs at the Cornell Sheep Farm. Unlike cows, lambs can be fed straight alfalfa, so the lamb test avoided the confounding effects of mixed feeds.

After the successful lamb feeding trial, the researchers used a prediction equation to extrapolate to dairy cows, assuming alfalfa would comprise half of a cow's dry diet.

Beyond its excellent yield potential, N-R-Gee was selected for resistance to multiple diseases that are problematic in the Northeast, including bacterial wilt, verticillium wilt, fusarium wilt, anthracnose and phytophthora root rot. Disease resistance is especially important in alfalfa, as it stays in the field year-round, for multiple years.

Since 1963, Cornell has released 21 alfalfa varieties for use in the Northeast, initially led by Professor Emeritus Royse Murphy and now by Professor Don Viands, both of plant breeding and genetics.

The N-R-Gee alfalfa variety was licensed by the Cornell Center for Technology Enterprise and Commercialization and is being marketed by Seedway, LLC.