Update - In Bloom
The long-awaited purple bloom of the corpse plant appeared March 18 and will last about 48 hours. The public can visit the plant today, Monday, March 19, from 9 a.m. to 11 p.m. The plant has its own blog for those who can't visit it in person at http://blogs.cornell.edu/arum, and a Facebook poll to name the plant has also been created.

The corpse plant, also known as titan arum (Amorphophallus titanum), has a bloom that has been recorded only 140 times in cultivation, and perhaps that's for the best, as the plant smells like rotting meat when in bloom. The strong odor and deep purple color of the inner leaf attracts carrion flies for pollination in its native rainforests on the island of Sumatra. 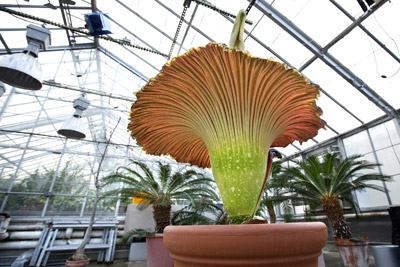 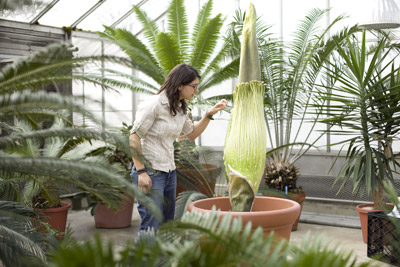 Now, a titan arum in the Kenneth Post greenhouse on campus is expected to bloom any day. The plant is located in the Green Greenhouse 114, attached to Kenneth Post Lab on Tower Road on campus, and will be open to the public from 10:30 a.m. to 1:30 p.m. beginning Tuesday, March 13, until the bloom is complete.

Titan arum was extremely rare in cultivation until a researcher brought seeds to the west in the mid-1990s. Cornell acquired seeds in 2002, when Melissa Luckow, associate professor of plant biology, witnessed a flowering corpse plant while visiting the University of Wisconsin-Madison. In the care of Cornell University Agricultural Experiment Station (CUAES) greenhouse grower Carol Bader since then, this is the first year Cornell's titan arum has flowered. The plant takes seven to 10 years for a plant grown from seed to reach flowering size, and then it may flower every few years.

"It isn't a common occurrence," said Luckow. "It's really an event."

When the flower blooms, it lasts only a day or two before withering.

In the wild, the plant is rare, and it is listed as a vulnerable species. Appearing like a prop from an early episode of "Star Trek," the plant's complete flower head -- more accurately referred to as its inflorescence -- can reach three meters in height. The inflorescence includes two main parts, a corrugated leaf wrapped around a velvety cone-shaped spadex that rises up from the leaf. When in bloom, the leaf with a purple inner side unfolds to many feet around the spadex. At the bottom of the spadex, beneath the leaf, are tiny male and female flowers; the female flowers emerge first and are receptive for one day, after which the males produce pollen. Cross-pollination from another flower is required for it to fruit.

In the wild, it is believed that the strong odor and large spadex serve to "send the scents out over long distances" and attract carrion fly pollinators, said Luckow. The plant also has a large tuber, a storage "root" that can weight up to 200 pounds, the largest such structure known in the plant kingdom. When dormant, the plant's energy goes down into the corm. Once the plant reaches flowering size, the tuber puts up a single inflorescence, which blooms, withers, and is replaced by a single leaf that looks like a small tree, with a single green polka-dotted stem that divides at its apex into many leaflets.

Another corpse plant, at a greenhouse at Binghamton University, bloomed in 2010, and horticulturists there saved and froze the pollen. Andrew Leed, Cornell College of Agriculture and Life Sciences greenhouse manager, said he hopes to coordinate with Binghamton to try to pollinate the Cornell corpse plant.

Once it blooms, Cornell plans to keep the Post greenhouse open to the public until 11 p.m. Large group visits from schools should be scheduled in advance by contacting Joe Schwartz at Cornell's Press Relations Office at 607-254-6235.