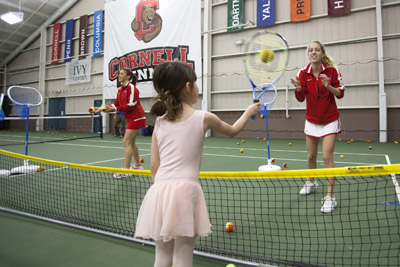 Keeping an eye on the ball at Cornell's Reis Tennis Center just got a whole lot easier, thanks to new, brighter, energy-saving lights.

The 1994 facility on Pine Tree Road had its original lights, until they were replaced in January.

"We went from the lowest to the highest light levels" among Ivy League NCAA tennis facilities, said Marty Johnson, Reis Tennis Center manager, "and now others are following suit." 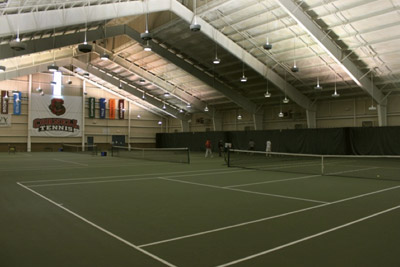 Provided
This photo shows the lighting at Reis Tennis Center before new lights were installed in January.

Not only are the new T5 high-output fluorescent lights twice as bright, but they are far more efficient, using 70 percent less energy annually compared with the old metal halide lights. They will also save $20,000 per year on energy costs.

The old lights took many minutes to warm up, so once they were turned on, they were left on. The new lights turn on and off quickly and are fitted with controls and two occupancy-sensors over every service line on each of the six indoor courts. If there is no movement for 15 minutes on a court, the lights automatically shut off. The system also can be dimmed for moderate lighting during recreational use and turned on full for varsity tournaments. 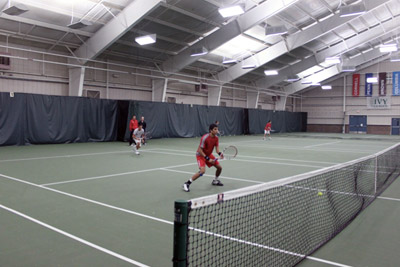 In addition, the old lamps, which dimmed over their lifetimes, burned out within two years, but the new lights last at full brightness for seven years, which contributes to $2,000 annual savings in maintenance fees by cutting down on the number of times a high-lift vehicle must be brought into the facility to change lamps.

The project cost nearly $100,000, but Cornell received a $47,000 energy rebate from the New York State Energy Research and Development Authority; the university expects the project to pay for itself within two to three years.

"My hope is that we can parlay the success at Reis into an effort to retrofit more athletics high-bay spaces," said W.S. (Lanny) Joyce, director of energy management in Facilities Services. Spaces that could benefit from new lights include the Ramin Room and Newman Arena in Bartels Hall, Lynah Rink, the pool and other high-ceilinged rooms in Teagle Hall, Barton Hall, the pool and basketball court in Helen Newman Hall, and Oxley Arena, Joyce said.

"The huge environmental benefits of these new lights play into President [David] Skorton's zero carbon goal," said Garrick Blalock, associate professor of applied economics, a fellow at Cornell's Atkinson Center for a Sustainable Future and an adviser to the Cornell men's tennis team, referring to the American College and University Presidents' Climate Commitment that Skorton signed in 2007 and pledges the university to a path of zero carbon emissions by 2050.

"Lighting is the most visible form of energy waste," Joyce said. "Innovative new lighting and controls are part of the overall energy goals as we strive toward climate neutrality, and we appreciate the athletics department for bringing this forward," he added.

And for those who simply enjoy playing tennis, "these new lights are just much nicer to play under," said Mike Stevens, the Carl H. Meinig '31 Head Coach of Women's Tennis. "They make a big difference in how you can see the ball," he added.