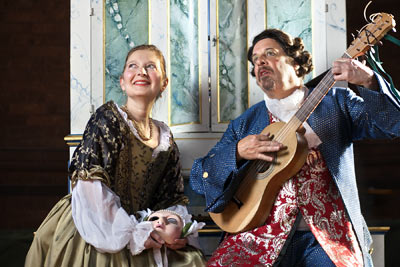 The Cornell Symphony Orchestra, with conductor Chris Younghoon Kim, will perform the world premiere of Jesse Jones' "Focus" March 10 at 8 p.m. in Bailey Hall. Free and open to the public.

The Hotel School's Guest Chefs Series offers a unique culinary experience March 10 at 6 p.m. in Statler Hall's Beck Center Atrium, with a four-course dinner by Jimmy Bradley, executive chef and owner of New York City restaurants The Red Cat and The Harrison. Bradley is a James Beard Award finalist and appeared on "Top Chef: Masters." He will lead a Q&A following dinner, at 9 p.m.

The series accompanies a course (now in its 22nd year) in which Professor Giuseppe Pezzotti and a class of 20 students invite industry professionals to campus, and plan and execute a multicourse dinner with wine pairings. This semester's series began Feb. 25 with former "Top Chef" competitor Ron Duprat.

Tickets are $100 and include cocktails, dinner and wine. Register online at http://guestchefs.sha.cornell.edu.

In addition to events on campus with choreographer and A.D. White Professor-at-Large William Forsythe and a Bailey Hall program featuring New York Baroque Dance Company (see item this page), festival events at the Schwartz Center for the Performing Arts include:

Tickets range from $10 to $15, available at http://www.schwartztickets.com, at the Schwartz Center box office or by calling 607-254-2787. The festival is organized by Cornell senior lecturer Bryan Suber. Information: http://www.theatrefilmdance.cornell.edu/events/Locallygrowndancefestival2012.cfm

From Africa to Tibet

Cornell Cinema this week will feature "Oka!" March 9-13, based on the true story of an American ethnomusicologist on a journey to capture Baraka Pygmy music and the sound of an elusive instrument, amid logging in the forest threatening the tribe's way of life; and "My Reincarnation," a documentary chronicling the dilemma faced by a chosen Tibetan spiritual leader.

Screenings of "My Reincarnation," March 8 and 11, will feature guest speakers from the International Dzogchen Community. In the film, director Jennifer Fox explores 20 years in the relationship between Tibetan master Chögyal Namkhai Norbu Rinpoche and his Italian-born son, Yeshi, who is recognized as the reincarnation of a Tibetan Buddhist spiritual leader -- a path his father encourages but Yeshi considers complicated by his Western upbringing. Information: http://cinema.cornell.edu.

Three baroque operas about love around the world unfold March 11, 3 p.m. in Bailey Hall, with dancing and singing in the style of the Paris Opera almost three centuries ago.

The Department of Music presents "Les Voyages de l'Amour: Operatic Flights From 18th-Century France" with works by Nicolas Clérambault, André Campra and Jean-Philippe Rameau. It is choreographed and directed by Catherine Turocy, artistic director of the New York Baroque Dance Company, whose members will perform with student dancers.

The Clarke Program in East Asian Law and Culture, the East Asia Program and the Mario Einaudi Center for International Studies will present a conference, "Japan's Earthquake and Tsunami One Year Later: How Can We Bring Closure to Crisis?" March 11-12. Open to the public.

International experts will address economics, business, law, disaster response, social activism, religion, history and other issues raised by the disasters and their aftermath, and the question of bringing closure. Meridian 180 will host online forums during the conference.

The Clarke Program also celebrates its 10th anniversary and the official launch of Meridian 180 at a private event March 12. The think tank for trans-Pacific relations and dialogue was conceived more than a year ago and has attracted a community of intellectuals, policymakers and business people from the Asia-Pacific region, the United States and around the world. They have engaged in forums on the earthquake and tsunami, privacy rights, the Occupy movement and other topics; with the hope that some forums will become multidisciplinary working groups for real policy change.

Cornell Plantations is hosting an exhibition of paintings by retired Cornell physicist Nari Mistry in the Nevin Welcome Center.

"Landscape Paintings: Scenes of Ithaca in Bold Colors," on display through April 28, features the Ithaca artist's watercolors and acrylics in a continuing series depicting waterfalls and other local scenes.

"I try to use expressive bold colors to represent the subjects that inspire me. Even a scene of winter ice and snow can contain a touch of warm color in a few spots!" said Mistry, who retired in 2003 after 39 years at Cornell to catch up on painting and music. He was an adjunct professor and senior research associate in the Floyd R. Newman Laboratory for Elementary-Particle Physics. His artwork can be seen at http://www.ArtbyNari.com.

Abbas Maleki will speak on "Iran's Foreign Policy and Its Future," March 12, 4:30 p.m. in Hollis E. Cornell Auditorium, Goldwin Smith Hall. The lecture, in the Mario Einaudi Center for International Studies' Foreign Policy Distinguished Speaker Series, is free and open to the public.

Maleki was a member of the negotiating team for ending the Iran-Iraq War (1987-92) and served as Iran's deputy foreign minister from 1988 to 1997. He has a distinguished record in public service, academic appointments in the U.S. and Iran, and has published work on energy policy, energy security, public policy, Iran's foreign policy and the Islamic Revolution. He co-authored "Reading in Iran Foreign Policy After September 11" (2008); a new work, "Iranian Foreign Policy: Past, Present and Future Scenarios," will publish in November. He was recently appointed to the Network of Global Agenda Councils of the World Economic Forum.

His visit is co-sponsored by Team Iran-Cornell and the Cornell Institute for Public Affairs. Information: http://www.einaudi.cornell.edu/node/9294.

Their Cornell appearance is part of a three-day residency in Ithaca, with activities on campus including a music workshop, lecture and outreach for public school students, coordinated by Cornell Gamelan Ensemble director Christopher Miller.

Pak Purbo will narrate the story of "Arjuna's Profound Meditation," a parable from the Mahabharata about inner strength and character prevailing over evil.

Tickets are $25-$35 reserved; students $17, available at http://www.CornellConcertSeries.com or http://www.BaileyTickets.com; Ticket Center Ithaca on The Commons (607-273-4497); and at the door. Cornell employee and student discounts are available online with a valid NetID.

The annual Dragon Day Parade will be Friday, March 16, from 1 to 2 p.m. starting from Rand Hall.

The Dragon, designed and built by first-year architecture students, will travel east on University Avenue, turn south onto East Avenue, west on Campus Road, and enter the south central walkway at the College Avenue intersection, continuing towards Ho Plaza and the Arts Quad.

Cornell Police and Environmental Health and Safety ask the community to enjoy the festivities in a safe manner.

The luncheon is free and open to the first 25 people to register by March 16 at special-events@cornell.edu. A light menu of local fare will be served at 11:30 a.m.

McEueun's first novel, "Spiral," is a scientific thriller published in March 2011 by Random House in the U.S. and 15 markets worldwide. He is the Goldwin Smith Professor of Physics, and directs the Laboratory of Atomic and Solid State Physics and the Kavli Institute at Cornell for Nanoscale Science. He joined the faculty in 2001.