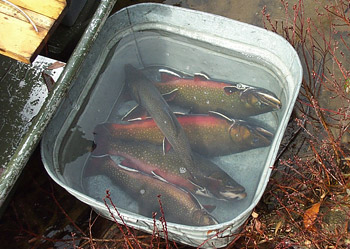 The New York state fish could be in jeopardy due to climate change, warn Cornell scientists.

Cliff Kraft, associate professor in the Department of Natural Resources, and four other researchers looked at 11 years of data from Rock Lake in the Adirondacks to find the link between summer temperatures and spawning times for brook trout. Cornell has a 60-year history of research in Adirondack lakes, providing the researchers with long-term data on temperatures and brook trout spawning times.

"The key thing is they are cold-water fish and need groundwater to spawn," Kraft said.

The warmer summer temperatures have had a "sub-lethal effect," Kraft said. Warmer summers don't kill the fish, but lead to fewer nests -- called redds -- and a late start for those eggs that are laid.

"These trout can't build gonads in the summer," Kraft said. "They're burning more energy to survive, so they don't have energy to produce eggs. The warmer it gets, the fewer fish are spawning; some just give up."

In a study published in the Global Change Biology journal March 13, the researchers argue that temperature can be linked to the delay in spawning.

An average difference in mean summer daily air temperature of 1 degree Celsius delayed spawning by about one week and reduced the number of redds constructed by 65, they found.

"The last brook trout in this lake is not about to drop dead, but warming temperatures present a substantial threat," Kraft said.

All of these factors can affect the food source available for the young fish when they do emerge. If fish are relying on that plankton when they hatch, they may be weeks too late, and the natural synchrony of the blooms and the hatching period are pulled out of whack in two directions, Warren said.

The researchers believe unstratified lakes -- or lakes shallow enough not to have layers of water at different temperatures and densities -- will become more common. That could pose further threats to fish like trout, which take refuge in cool water, Warren said.

"This study highlights the importance of looking at residency and non-migratory populations," he said.

Liz Lawyer is a freelance writer in Ithaca, N.Y.