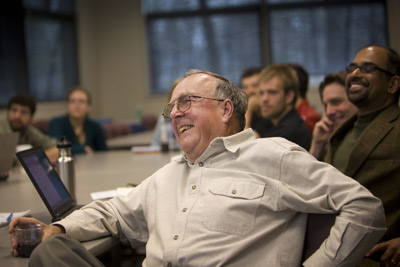 John A. Swanson '61, M.Eng. '63, has committed $10 million to boost undergraduate education in the College of Engineering -- including its experiential learning opportunities.

Another $2 million will provide endowment funds for the Academic Excellence Workshop, which allows students to enhance their education through structured peer interactions, and the Engineering Learning Initiatives program, which enables undergraduates to work alongside Cornell's world-class faculty. The remaining $3 million will establish the John A. Swanson Engineering Undergraduate Scholarship Fund.

For more than 25 years, the college has supported the project teams that involve hundreds of undergraduate and graduate students from across the university in national competitions. The annual budget for the teams is more than $200,000.

"These teams provide students with not only the technical challenge of designing and building a complex system, but the opportunity to work with others from different disciplines and to get entrepreneurial, management and financial experience that will inspire some to go on to create startups," said Lance Collins, dean of the college. "Thanks to John's incredibly generous gift, these teams will no longer have to rely on uncertain funding from companies and other sources that fluctuate year to year.

"On behalf of the thousands of future engineers who will benefit from these programs and get hands-on practice that complements the classroom experience, I am grateful for this extraordinary investment in experiential learning."

In giving the gift, Swanson said he is motivated by his belief that an undergraduate engineering education should generate engineers who are ready to join the workforce as productive members. Having ample experience working on teams and producing real products, Swanson and Collins agree, help produce well-prepared engineers. In addition, Swanson's philanthropy "is part of my philosophy: You can't take it with you, so use it effectively here."

Swanson, who earned two Cornell degrees in mechanical engineering and a Ph.D. in engineering at the University of Pittsburgh, is a pioneer in the design and application of simulation software for engineers and designers. In 1970, he founded the company that would later be renamed ANSYS Inc., and he served as its CEO until selling the company in 1994.

ANSYS's founding idea was that the difficult calculations required for evaluating systems and designs could be programmed and then used again and again as software. The idea revolutionized the work of engineers and designers in fields including engineering, architecture and even medicine.

When Swanson and President David Skorton first met, Skorton's first statement was, "Do you ever have trouble sleeping?" When Swanson said, "No, not really," Skorton handed Swanson two cardiology papers he'd written with the help of ANSYS software, with the comment, "If you ever do, these should help."

Many of the engineering student teams the Swanson gift supports also rely on ANSYS software to develop and test their products in the lead up to competition with other schools.

When Swanson and his wife, Janet, recently came to campus, engineering student team members made presentations to Swanson on their progress. "It was the highlight of the visit," Swanson admitted with a smile. (For Janet Swanson, the highlight was visiting the College of Veterinary Medicine, where she has given significant support for the Maddie's Shelter Medicine Program and the Janet L. Swanson Wildlife Health Center and Program.)

At the team presentations, Swanson carefully questioned each group, tested their thinking, and made technical suggestions.

Swanson serves on the Engineering College Council and is an active participant and former longtime chair of the Swanson Engineering Simulation Program Advisory Board.

Swanson's commitment follows a gift announced last week of $11 million from Lisa and Richard Baker '88 for Cornell's Program in Real Estate. Both gifts to the Ithaca campus support Cornell's strategic plan priority of increasing excellence in education and cross-college opportunities for students.

Emily Sanders Hopkins is a staff writer in the Division of University Communications.

This article has been modified to reflect the correct year John Swanson matriculated.