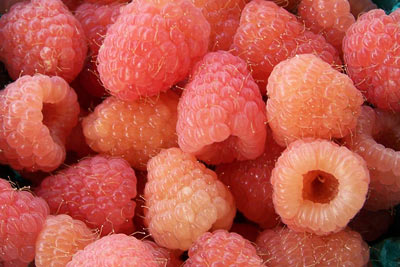 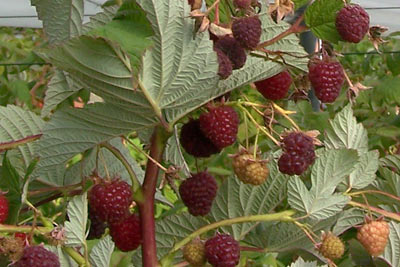 "Both varieties have attracted a lot of interest from small-scale growers because they are looking for varieties with intense flavor and a different look from the supermarket varieties," said Courtney Weber, Cornell small fruits breeder and associate professor of horticulture. "If consumers get a taste of these, they will buy them."

Double Gold produces a deeply blushed, golden champagne-colored fruit with a distinctive conical shape, earning the "double" in its name for its two harvests per season. The first year of planting, the initial crop is produced in the fall on the tips of that year's canes, and a second crop is produced farther down the same canes the following summer. According to Weber, none of the golden raspberries already on the market combine excellent flavor, peachy blush color, a conical shape and the ability to bear two crops per season.

"I have been told by sellers at farmers markets that having several colors on your display is a good way to draw in customers and distinguish you from other sellers," said Weber. "I'm hoping Double Gold will fit that niche."

In Weber's taste tests, Double Gold has been a favorite. The release is targeted to u-pick growers, farm stands and home gardeners because the fruit is too delicate for long-distance shipping. Although the fruit is tender, the plants that bear them are tough.

"Over eight years of testing, it has been consistently vigorous and disease-resistant," said Weber. "Specifically, we have observed it to be resistant to Phytophthora root rot as well as most of the common leaf diseases."

Crimson Night caught Weber's eye among thousands of raspberry selections in summer 2003 for its heavy fall crop and dark, shiny fruit. Grown in a commercial high tunnel system that offers protection from the elements, it is vigorous and productive. Grown outdoors without protection, Crimson Night is more compact, making the dark purple canes a particularly attractive ornamental for container gardening or a backyard raspberry plot.

"The berries are medium large with excellent flavor," said Weber. "Although the color is considered too dark for wholesale markets, the shiny, conical fruit are very attractive in a container at a farm stand."

According to Jessica Lyga, plant varieties and germplasm licensing associate for the Cornell Center for Technology Enterprise and Commercialization, both varieties have been licensed to North American Plants, LLC., a propagator that sells to nurseries and growers across the United States. Small quantities will be available late this summer, and North American Plants expects to have enough plants to meet the anticipated demand of each variety by the spring of 2013. Plant patents will be filed later this year.

Double Gold and Crimson Night are the fourth and fifth new berry varieties introduced by Weber in the past year. Recent releases include Purple Wonder, the darkest strawberry variety available; the Herriot strawberry, a high-yielding midseason variety; and the Crimson Giant raspberry, suitable for high tunnel cropping systems with a November harvest. Weber hopes to maintain a steady pace with selections this summer.