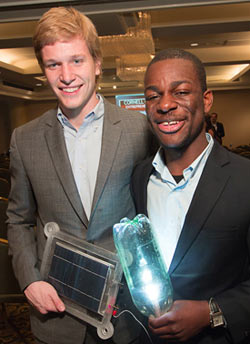 An idea that uses soda bottles to bring light to people in developing countries won the $3,000 first-place prize April 20 at the Big Idea undergraduate business competition, part of this year's Entrepreneurship@Cornell Celebration, April 19-20.

CapLight, created by Chris Dobyns '13 and Folajimi Fowose '13, replaces the cap of a standard soda bottle with an LED light assembly designed to provide low-cost, energy-efficient lighting in areas without electricity.

"Our product could raise the standard of living for a whole community," Dobyns said during a three-minute pitch to judges.

The pair said they were inspired by the lack of nighttime lighting they've witnessed in sub-Saharan Africa. Fowose said they will use the prize money to build more prototypes, which they plan to distribute in Africa this summer.

The runner-up in the Big Idea competition was Practice Makes Perfect, a nonprofit organization that pairs struggling fourth-graders students with ninth-grade mentors in their school districts for summer academic enrichment programs led by Karim Abouelnaga '13, who received $2,000.

Second place winner Linsday Boyajian '13 received $1,000 for WeareverYouGo, a website that offers women a series of tools to help them dress in a culturally appropriate and fashion-forward manner while abroad.

And fourth place and $250 went to Smartphone Laser Tag, an indoor/outdoor laser tag system which allows a user to attach a laser gun to their smart phone, then use the phone as the laser gun's microchip and user interface, led by Richard Panzer '13.

"I'm impressed with their enthusiasm and their willingness to put themselves out there," said judge Steve Benjamin '80, M.Eng. '81, MBA '82.

The competition, open to all undergrads, drew more than 100 applications. Competitors were whittled down to 28 semifinalists in March, who received mentoring and advice from Samuel C. Johnson Graduate School of Management students. Eight finalists were announced April 2.

Also announced were winners of the Cornell Venture Challenge business plan competition, sponsored by BR Venture Fund, which offers a first prize of $10,000, second prize of $2,500 and third prize of $1,000. First prize went to Tadpoles, a company that helps child care centers use mobile technology to streamline operations and parent communication.

Sessions such as entrepreneurial innovation in biomedical products and opportunities in the local food movement offered the opportunity to learn from panelists and connect with Cornellians who are passionate about business creation.

"Conferences like this one allow people to tap into creative management ideas and translate those principals to startup and mid-level firms," said Bruce Hack '71.

"It's clear that student interest in entrepreneurship and innovation on campus has never been stronger," said John Jaquette, director of Entrepreneurship@Cornell. "This year, with the excitement surrounding the CornellNYC Tech campus, there is even more interest -- both in Ithaca and in New York City -- about business creation and economic development."

Highlights of the conference included:

Kathy Hovis is a writer/editor for Entrepreneurship@Cornell.