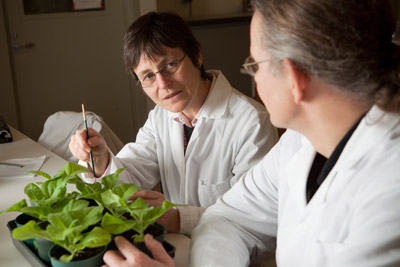 Sugar may be a treat for humans, but for aphids it can be life threatening. A $452,000 grant to Cornell and Boyce Thompson Institute for Plant Research (BTI) will fund research exploiting this vulnerability to control agriculturally important insect pests.

"When aphids and similar insects feed on plants, they transmit viruses, bacteria and other disease-causing microbes to the plant," said Angela Douglas, Cornell's Daljit S. and Elaine Sarkaria Professor of Insect Physiology and Toxicology and a co-investigator for the grant. "There is an urgent need for new strategies for insect control, because insects are developing resistance to traditional broad spectrum insecticides."

Douglas and Georg Jander, an associate scientist at BTI, proposed a new method to deter insects: genetically engineering plants to protect themselves by disrupting crucial processes in the insect gut for coping with the high levels of sugar in their diet of plant sap.

"Aphids and their relatives feed directly on the plant's phloem sap, the system that carries water and nutrients within the plant," said Jander. "Because the phloem is very sweet -- about twice as sweet as grape juice -- they require adaptive mechanisms to prevent them from dehydrating while feeding." Otherwise, the high concentration of sugar in the gut will draw water from surrounding tissues, resulting in dehydration, just as when a human drinks seawater.

Initially, Douglas and Jander will identify genes in aphids and two related species that modify and transport sugars as well as genes that control water transport in the insects. They will modify plants to produce double-stranded RNA of the targeted insect genes, thereby enabling them to turn off these crucial genes in the feeding insects.

"When the plant expresses the insect gene, the RNA 'blueprint' for the corresponding protein will be produced in the phloem where the insect feeds," explained Jander. The insect's system interprets the RNA as an invader and blocks the expression of that gene sequence, which blocks production of the corresponding protein. The technique is called RNA interference (RNAi) or gene silencing.

The method will be tested in two model plant species -- Arabidopsis and tobacco -- and with insect pests including the peach-potato aphid, the sweet potato whitefly and the potato psyllid. These insects are important carriers of crop diseases in the Northeast, across the United States and worldwide. The researchers expect to see the insects dehydrate and die, but also will perform genetic assays to determine if the insect genes have indeed been silenced.

"The beauty of this approach is that we can specifically target genes in the insect without any side effect on the plants," said Douglas.

The implications of successful RNAi would be far-reaching for disease control in plants. "There have been preliminary reports of using RNAi in plants to silence aphid genes," said Jander. "If this approach works well, it will open up new avenues to battle plant viruses, which are notoriously difficult to control, as well as other insect-spread diseases, including the citrus greening epidemic which is currently threatening the Florida citrus industry."

The award was granted through the Agriculture and Food Research Initiative of the USDA National Institute of Food and Agriculture. It will fund postdoctoral associates in the Douglas and Jander labs over the next three years.