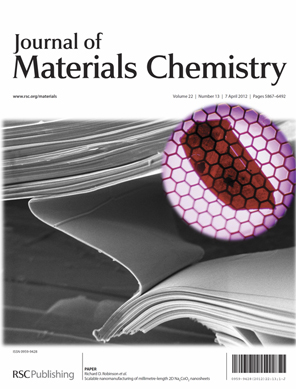 The work, led by Richard Robinson, assistant professor of materials science and engineering, is featured on the cover of the April 7 Journal of Materials Chemistry (Vol. 22, No. 13).

The millimeter-length, 20 nanometer-thick sodium-cobalt oxide crystals were derived through a novel method that combined a traditional sol-gel synthesis with an electric field-induced kinetic de-mixing step. It was this second step that led to the breakthrough of a bottom-up synthesis method through which tens of thousands of nanosheets self-assemble into a pellet.

The nanosheets also show the ability to bend, sometimes up to 180 degrees, Robinson added. This is unusual for ceramics, which are normally brittle.

The material is based on common, abundant elements (sodium, cobalt and oxygen), without toxic elements, such as tellurium, that are normally used in thermoelectric devices.

The paper's co-authors are graduate students Mahmut Aksit and David Toledo. The work was supported by the National Science Foundation and the U.S. Department of Energy, through the Energy Materials Center at Cornell (EMC2).