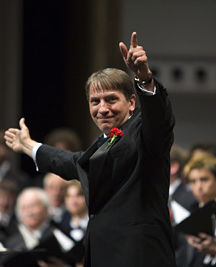 The Choral Arts Society of Washington, D.C. -- one of the most prestigious choirs in the country -- has announced the selection of Scott Tucker, Cornell professor of music, as its new artistic director, effective with the 2012-13 season.

"Scott has spent the last decade-and-a-half building an amazingly vibrant choral program at Cornell," said Steve Pond, Cornell music department chair. "He can be proud of his accomplishments here and has built a strong legacy for future conductors to live up to."

During his tenure at Cornell, Tucker also oversaw the activities of the Cornell Chorale, Chamber Singers and Sage Chapel Choir. Under Tucker's leadership, the Cornell choirs toured nationally and internationally, performed frequently with the Syracuse Symphony Orchestra during its operation, prepared major works for several leading conductors and collaborated with acclaimed artists such as Anonymous 4, Peter Schreier and Garrison Keillor of NPR's Prairie Home Companion.

In a statement, Scribner said that Tucker's gifts embrace "an intense natural musicality, a consummate technique, a fabulous ear and a vast reservoir of knowledge and experience in virtually all periods and styles, together with a clear vision for the future of music in our own time. ... Scott's appointment heralds a brilliant new era in the Choral Arts Society's pursuit of excellence in the choral arts."