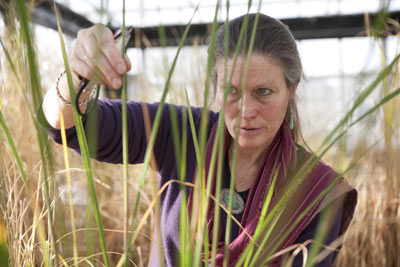 As rice farmers around the world begin to turn from wet paddies to dry fields in an attempt to conserve water and mitigate climate change, they are facing a new foe: aluminum.

Aluminum, the third most abundant element in soil, can be toxic to plants in acidic conditions. Its harmful effects are diluted in the flooding of traditional rice paddies but are becoming an issue as farmers try new ways of raising their crops.

For example, she has identified several promising varieties of rice that are tolerant to the metal in research with Leon Kochian of the U.S. Department of Agriculture's Robert Holley Center for Agriculture and Health.

They found, for instance, that japonica varieties are twice as tolerant to aluminum than the more diverse indica varieties commonly grown around the world. They also discovered that there are different mechanisms within each variety that influence their tolerance -- some are able to keep aluminum from entering the roots, while others take up the metal and detoxify it inside root cells.

McCouch is now trying to determine whether crosses among the strains could result in new super-tolerant varieties.

"In the coming years, we will need to double rice production, with less water and fewer inputs. Genetic variation will be key to accomplishing that goal," McCouch said.

Insight into aluminum tolerance in rice could also provide a good model to investigate the effects of aluminum toxicity in such important cereal crops as maize and wheat, which are less tolerant than rice, McCouch said. Aluminum toxicity is a primary limitation to crop production on about 50 percent of the world's potentially arable land, including about 20 percent of land in North America.

Her lab has published several papers about the work over the past year, in PLoS Genetics and Plant Physiology, and McCouch presented her findings in April at a Cornell symposium.

Harnessing a wider spectrum of genetic variation requires a lot of time and money, she said at the symposium, as well as a good roadmap, which is where her lab is providing valuable insight.

"Gene banks around the world are storing seeds from thousands of varieties that have never been used. This kind of new information opens up enormous possibilities," McCouch said.

She also applies the latest genomic sequencing technologies and algorithms developed in her lab to identify the location of desirable traits on genes of those varieties. As part of the aluminum tolerance study, graduate students Randy Clark and Adam Famoso created a novel 3-D imaging and software system that allowed them to record and assess the entire root system, rather than relying on traditional methods that use a ruler or a caliper to measure just the longest root.

"What good is sequencing info if you can't connect the dots? Knowing where to look for positive alleles and how to recombine them will be key to breeding in the future," McCouch said.