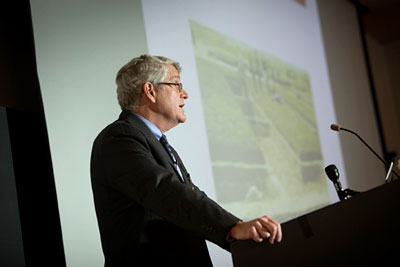 Jason Koski/University Photography
David Lee, professor of applied economics and management, speaks about "Sustainability: Economics, Environment and Equity" at a regional symposium of the National Academy of Engineering on May 16.

Understanding the interplay between business, politics and economics is crucial to achieving sustainable development in the next century, said Cornell professors at the "Social Responsibility/Equity, Economics, Population and Business" session of the half-day regional symposium, "Toward a Sustainable Future," of the National Academy of Engineering (NAE) May 16 on campus.

In a prerecorded talk, Stuart Hart, professor of management and operations at the Samuel Curtis Johnson Graduate School of Management, said that sustainability is driving a new approach to alleviating global poverty. Companies, especially those from developing nations, are increasingly serving emerging markets in "disruptively innovative ways," said Hart.

He described sustainability as falling into two broad categories, "greening" and "beyond greening." Greening refers to the incremental reduction of negative environmental impacts associated with products and processes with such initiatives as waste reduction, pollution prevention and recycling.

"Beyond greening," he said, refers to emerging technologies that address the needs of underserved markets. "These kinds of strategies are more disruptive and have the potential to make current industries obsolete as they stand, and restructure industries or create entirely new ones," Hart said. "It's really the beyond greening strategies that become most important."

David R. Lee, professor in the Charles H. Dyson School of Applied Economics and Management, said that economics offers a cost-benefit framework for thinking about sustainability and provides specific tools for assessing whether sustainable technologies are economically viable.

"Technology is great, but ultimately technologies have to be used by people," Lee said. "It's the incentives and disincentives that people face along with the constraints under which they operate that determine adoption and use."

Economics, he said, emphasizes the dynamic nature of human behavior, recognizing that preferences can often change, and that incentives and disincentives, typically expressed through prices, can have a significant impact on human behavior.

"This prompts us to devote a lot of attention on how to alter incentive structures to address societal problems," said Lee, noting that the concept of a carbon tax, for example, seeks to address greenhouse gas emissions and is favored by most economists.

In addition, sustainability depends on getting the science right, noted Ronald Herring, professor of government, but science is often politicized. He cited battles in the United States over evolution, vaccination, climate change and genetically modified organisms (GMOs).

The issue of using GMOs is especially contentious, he said, because some people believe biotechnology to be risky, and many countries ban its use in agriculture. However, genetically engineering crops permits the addition of traits that are unavailable in other methods of breeding; these traits can be crucial for increasing sustainability of agriculture, particularly in the face of climate change, he said.

"The global debate about GMOs is entirely socially constructed," he said. He cited a recent report from the European Union's Directorate of Research: "The main conclusions to be drawn from the efforts of more than 130 research projects over a period of 25 years are that GMOs are not more risky than conventional plant-breeding techniques."

Science is inherently vulnerable to politics, he concluded, for its epistemological commitments to tentative conclusions and continuous revision. Moreover, he said, scientists are usually reluctant to enter the political fray for professional reasons, whereas junk science is certain of conclusions, readily available and often powerful as a political weapon, he said.

The session was moderated by Norm Scott, professor of biological and environmental engineering and an NAE member; the symposium was co-sponsored by the Atkinson Center for a Sustainable Future.