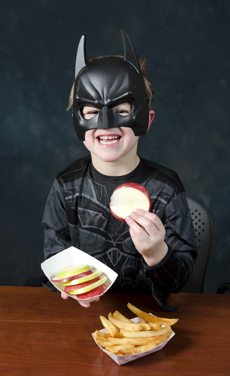 Provided
Youngsters who are asked, "What would Batman eat?" choose foods that are more healthful than children who don't consider the food choices of superheroes, reports a Cornell study.

In the ongoing battle to get children to eat healthfully, parents may do well invoking the names of superheroes to come to their rescue, say Cornell researchers.

Just as Popeye inspired a generation to eat spinach, such role models as Spiderman or Batman could help children make healthy choices, according to Brian Wansink, the John S. Dyson Professor of Marketing and director of the Cornell Food and Brand Lab.

Wansink, with postdoctoral researcher Mitsuru Shimizu and visiting graduate student Guido Camps of Utrecht University in the Netherlands, conducted a study in which 22 children, ages 6-12, at a summer camp were asked if they wanted "apple fries" (thinly sliced raw apples) or French fries during several consecutive Wednesday lunches.

During one of those lunches, the children were first presented with 12 photos of real and fictional role models and asked, "Would this person order apple fries or French fries?"

The researchers hypothesized that children who thought admirable models would eat well would activate positive associations towards healthful food and become more likely to choose apple fries over French fries.

The results supported this theory: 10 (45 percent) of the children selected apple fries after viewing pictures of superheroes and other role models, compared with the two (9 percent) who chose apple fries during other lunches with no prompts. The study was published in the journal Pediatric Obesity in April.

"Fast food patronage is a frequent reality for many children and their parents. Simply instructing a parent to order healthier food for a child is neither empowering for a child nor easy for a parent," Wansink said. "Advising a parent to ask their child 'What would Batman eat?' might be a realistic step to take in what could be a healthier fast-food world.

Wansink will discuss the study and other highlights of his research as part of his next Consumer Camp, on the Cornell campus May 31.

Author of "Mindless Eating: Why We Eat More Than We Think," Wansink has conducted several studies on the influence of environmental cues on consumer behavior. He recently found that the color of your plate can affect how much you eat, and that children prefer lots of variety in their meals.

Other topics at the Consumer Camp include "The Magic Lunch Tray" and "Restaurant and Supermarket Danger Zones."