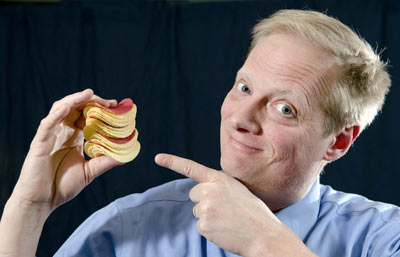 Once you pop the top of a tube of potato chips, it can be hard to stop munching its contents. But Cornell researchers may have found a novel way to help: Add edible serving size markers that act as subconscious stop signs.

As part of an experiment carried out on two groups of college students (98 students total) while they were watching video clips in class, researchers from Cornell's Food and Brand Lab served tubes of Lays Stackables, some of which contained chips dyed red.

In the first study of the research, which is published online this month in Health Psychology, a journal of the American Psychological Association, the red chips were interspersed at intervals designating one suggested serving size (seven chips) or two serving sizes (14 chips); in the second study, this was changed to five and 10 chips.

'Weight of the Nation'

Brian Wansink will appear in episode two of the HBO documentary "Weight of the Nation," which airs May 14. It will follow episode one, which also airs May 14, beginning at 8 p.m.

"People generally eat what is put in front of them if it is palatable," said Brian Wansink, Cornell Food and Brand Lab director. "An increasing amount of research suggests that some people use visual indication -- such as a clean plate or bottom of a bowl -- to tell them when to stop eating."

"By inserting visual markers in a snack food package, we may be helping them to monitor how much they are eating and interrupt their semiautomated eating habits," he added.

Wansink, the John Dyson Professor of Consumer Behavior and author of the best-seller "Mindless Eating: Why We Eat More Than We Think," carried out the study with psychologists Andrew Geier of Yale University and Paul Rozin of the University of Pennsylvania.

"The effect demonstrated and replicated in these studies stands as perhaps the largest practicable procedure to decrease food intake in the literature," Wansink said. "Marking modest portion sizes promises to be an effective strategy in the attempt to reduce food intake and obesity."

He noted that the experiment reduced caloric intake among participants by about 250 calories.

Wansink said further studies are needed among larger, more diverse groups to determine in what context segmentation cues work, exactly why they work and whether people will compensate for the reduction in food intake by eating more later.