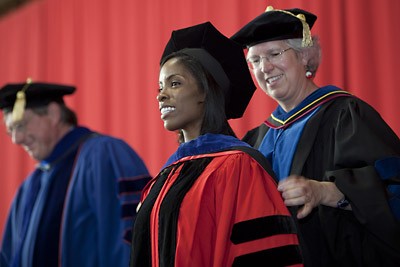 Robert Barker/University Photography
Barbara Knuth, vice provost and dean of the Graduate School, places an academic hood on Deondra Rose, a doctoral candidate in government, during the Ph.D. Recognition Ceremony in Barton Hall May 26. At left is Provost Kent Fuchs. 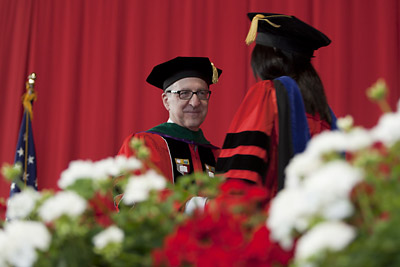 As recently as 10 years ago, the standard for success among graduating doctoral students was postdoctoral appointments or tenure track positions in academia, but "today the opportunities open to new Ph.D.s are incredibly broad," said President David Skorton, speaking to several hundred Ph.D. candidates and their friends and family members gathered in Barton Hall for the Ph.D. Recognition Ceremony May 26 during Cornell's 144th Graduation Weekend.

Indeed, with "some 2.6 million new and replacement jobs between 2010 and 2020" that will require an advanced degree in the United States, Skorton said, about half of all new doctorates nationally will find jobs outside of academia in "business, government and the nonprofit sector."

Also, the breadth of intellectual and cultural backgrounds of Cornell students has provided "valuable experience … in working across cultures in the pursuit of shared goals," Skorton said. At Cornell, students from 100 countries comprise 40 percent of the graduate student body. Skorton went on to cite graduates who will be headed abroad to "Australia, Sweden, China, Malaysia, Spain and Canada" as they soon start their careers.

"At a time when so many of the world's most daunting challenges -- global climate change, infectious diseases, trade regulation and many others -- cannot be solved without international collaboration, and when all of us need the skills to live and work effectively across cultures and national borders, your ability to work cross-culturally and transnationally will serve you increasingly well," Skorton said.

Following his remarks, the Cornell University Wind Ensemble played "Overture to Candide," by Leonard Bernstein. Then, as the doctoral candidates stepped onstage, each was individually recognized and hooded by Provost Kent Fuchs and Barbara Knuth, vice provost and dean of the Graduate School, then shook hands with Skorton.

At the start of the event, following a prelude by the wind ensemble, an academic procession, led by University Marshal Charles Walcott, included Ph.D. candidates, members of the Cornell Board of Trustees, administrators, faculty and deans. During the procession, the doctoral candidates waved and beamed at family members; several shed tears.

Following the hooding ceremony, members of the Cornell University Chorus and Glee Club led the assembly in the university's alma mater, "Far Above Cayuga's Waters."