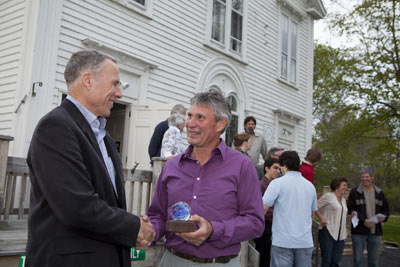 The President's Sustainable Campus Committee awarded the 2012 Cornell University Partners in Sustainability Award (CUPSA) to the town of Caroline May 1 for making "significant contributions to the sustainable development of Tompkins County and New York state, through collaborations with various stakeholders, and in a broad and giving spirit of community."

In announcing the selection, Cornell officials noted that over the last decade, Caroline has been the most environmentally responsible municipality in Tompkins County through its development of green initiatives, often involving Cornell staff and faculty, and including Cooperative Extension.

Highlights of Caroline's efforts include:

More information on the town of Caroline's path toward greater energy independence is available online (PDF).

The award was previously presented to NYSERDA (2010) and the Tompkins County Climate Protection Initiative (2011).