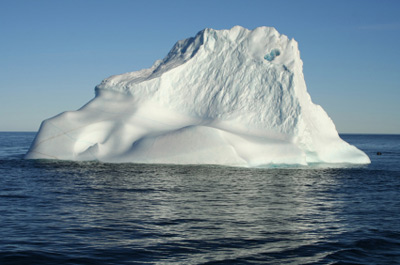 iStockphoto
Severe winter weather outbreaks are more likely due in part to the seemingly far-off problem of melting sea ice in the Arctic.

The dramatic melt-off of Arctic sea ice due to climate change is hitting closer to home than millions of Americans might think. That's because melting Arctic sea ice can trigger a domino effect leading to increased odds of severe winter weather outbreaks in the Northern Hemisphere's middle latitudes -- think the "Snowmageddon" storm that hamstrung Washington, D.C., during February 2010.

Cornell's Charles H. Greene, professor of earth and atmospheric sciences, and Bruce C. Monger, senior research associate in the same department, detail this phenomenon in a paper published in the June issue of the journal Oceanography.

"Everyone thinks of Arctic climate change as this remote phenomenon that has little effect on our everyday lives," Greene said. "But what goes on in the Arctic remotely forces our weather patterns here."

A warmer Earth increases the melting of sea ice during summer, exposing more dark ocean water to incoming sunlight. This causes increased absorption of solar radiation and excess summertime heating of the ocean -- further accelerating the ice melt. The excess heat is released to the atmosphere, especially during the autumn, decreasing the temperature and atmospheric pressure gradients between the Arctic and middle latitudes. 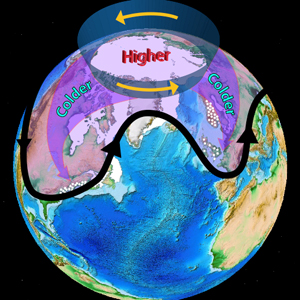 Provided
Negative Arctic Oscillation conditions are associated with higher pressure in the Arctic and a weakened polar vortex (yellow arrows). A weakened jet stream (black arrows) is characterized by larger-amplitude meanders in its trajectory and a reduction in the wave speed of those meanders.

A diminished latitudinal pressure gradient is linked to a weakening of the winds associated with the polar vortex and jet stream. Since the polar vortex normally retains the cold Arctic air masses up above the Arctic Circle, its weakening allows the cold air to invade lower latitudes.

The recent observations present a new twist to the Arctic Oscillation (AO) -- a natural pattern of climate variability in the Northern Hemisphere. Before humans began warming the planet, the Arctic's climate system naturally oscillated between conditions favorable and those unfavorable for invasions of cold Arctic air.

Greene says, "What's happening now is that we are changing the climate system, especially in the Arctic, and that's increasing the odds for the negative AO conditions that favor cold air invasions and severe winter weather outbreaks.

"It's something to think about given our recent history," Greene continued. This past winter, an extended cold snap descended on central and eastern Europe in mid-January, with temperatures approaching -22 Fahrenheit and snowdrifts reaching rooftops. And, of course, there were the record snowstorms fresh in the memories of residents from several eastern U.S. cities, such as Washington, New York and Philadelphia, as well as many other parts of the Eastern Seaboard during the previous two years.

But wait -- Greene and Monger's paper is being published just after one of the warmest winters in the eastern U.S. on record. How does that relate?

"It's a great demonstration of the complexities of our climate system and how they influence our regional weather patterns," Greene said. In any particular region, many factors can have an influence, including the El Nino/La Nina cycle. This winter, La Nina in the Pacific shifted undulations in the jet stream so that while many parts of the Northern Hemisphere were hit by the severe winter weather patterns expected during a bout of negative AO conditions, much of the eastern United States basked in the warm tropical air that swung north with the jet stream.

"It turns out that while the eastern U.S. missed out on the cold and snow this winter, and experienced record-breaking warmth during March, many other parts of the Northern Hemisphere were not so fortunate," Greene said. Europe and Alaska experienced record-breaking winter storms, and the global average temperature during March 2012 was cooler than any other March since 1999.

"A lot of times people say, 'Wait a second, which is it going to be -- more snow or more warming?' Well, it depends on a lot of factors, and I guess this was a really good winter demonstrating that," Greene said. "What we can expect, however, is the Arctic wildcard stacking the deck in favor of more severe winter outbreaks in the future."