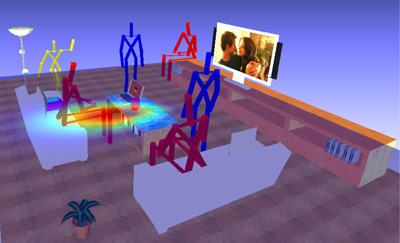 Provided/Personal Robotics Lab
A robot populates a room with imaginary human stick figures in order to decide where objects should go to suit the needs of humans.

If you hire a robot to help you move into your new apartment, you won't have to send out for pizza. But you will have to give the robot a system for figuring out where things go. The best approach, according to Cornell researchers, is to ask "How will humans use this?"

Previous work on robotic placement, the researchers note, has relied on modeling relationships between objects. A keyboard goes in front of a monitor, and a mouse goes next to the keyboard. But that doesn't help if the robot puts the monitor, keyboard and mouse at the back of the desk, facing the wall. 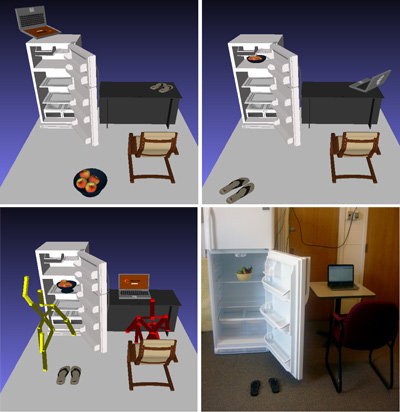 Provided/Personal Robotics Lab
Above left, random placing of objects in a scene puts food on the floor, shoes on the desk and a laptop teetering on the top of the fridge. Considering the relationships between objects (upper right) is better, but he laptop is facing away from a potential user and the food higher than most humans would like. Adding human context (lower left) makes things more accessible. Lower right: how an actual robot carried it out.

Relating objects to humans not only avoids such mistakes but also makes computation easier, the researchers said, because each object is described in terms of its relationship to a small set of human poses, rather than to the long list of other objects in a scene. A computer learns these relationships by observing 3-D images of rooms with objects in them, in which it imagines human figures, placing them in practical relationships with objects and furniture. You don't don't put a sitting person where there is no chair. You can put a sitting person on top of a bookcase, but there are no objects there for the person to use, so that''s ignored. It The computer calculates the distance of objects from various parts of the imagined human figures, and notes the orientation of the objects.

Eventually it learns commonalities: There are lots of imaginary people sitting on the sofa facing the TV, and the TV is always facing them. The remote is usually near a human's reaching arm, seldom near a standing person's feet. "It is more important for a robot to figure out how an object is to be used by humans, rather than what the object is. One key achievement in this work is using unlabeled data to figure out how humans use a space," Saxena said.

In a new situation the a robot places human figures in a 3-D image of a room, locating them in relation to objects and furniture already there. "It puts a sample of human poses in the environment, then figures out which ones are relevant and ignores the others," Saxena explained. It decides where new objects should be placed in relation to the human figures, and carries out the action.

The researchers tested their method using images of living rooms, kitchens and offices from the Google 3-D Warehouse, and later, images of local offices and apartments. Finally, they programmed a robot to carry out the predicted placements in local settings. Volunteers who were not associated with the project rated the placement of each object for correctness on a scale of 1 to 5.

Comparing various algorithms, the researchers found that placements based on human context were more accurate than those based solely in relationships between objects, but the best results of all came from combining human context with object-to-object relationships, with an average score of 4.3. Some tests were done in rooms with furniture and some objects, others in rooms where only a major piece of furniture was present. The object-only method performed significantly worse in the latter case because there was no context to use. "The difference between previous works and our [human to object] method was significantly higher in the case of empty rooms," Saxena reported.

The research was supported by a Microsoft Faculty Fellowship and a gift from Google. Marcus Lin, M.Eng. '12, received an Academic Excellence Award from the Department of Computer Science in part for his work on this project.