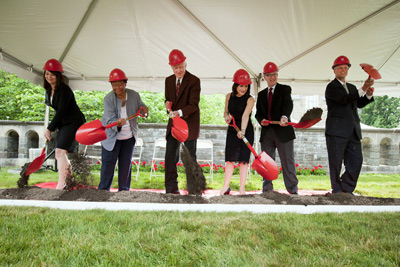 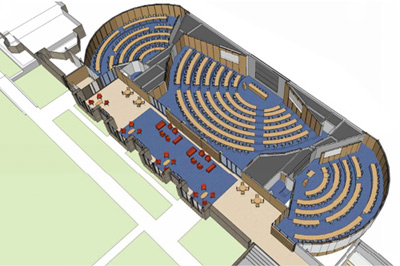 A champagne toast was raised at a groundbreaking ceremony for Cornell Law School's three-phase expansion and renovation project June 9.

The Reunion event outside 80-year-old Myron Taylor Hall drew alumni, faculty and Cornell administrators to the lawn off College Avenue, under which two state-of-the-art classrooms and a 170-seat auditorium will be built in Phase 1 of the $60 million project, pending Cornell University Board of Trustees approval.

In later phases, the law library and other spaces will be reconfigured and Hughes Hall, the Law School's residence hall, will be fully converted to offices and meeting spaces.

Stewart Schwab, the Allan R. Tessler Dean of the Law School, noted that when Myron Taylor Hall was dedicated in 1932, the Law School had 14 faculty members and 157 students. Today the school has more than 50 full-time faculty members, nearly 700 students, various research centers and institutes, and visiting scholars and exchange students.

"We're bursting at the seams from all this activity, and we need to expand our facility," said Schwab, who also noted that the Law School must adapt to 21st-century demands on the law. The expansion, he said, "will address our grand aspirations in being open, in being accessible and in being forward-looking."

Said Franci Blassberg, '75, J.D. '77, "As we celebrate the Law School's expansion, we are all dazzled by way in which the renovation has been designed and the opportunities it presents to further connect the Law School with the university. Today's ground breaking is the beginning of a major transformation for the Law School. It's a serious game changer."

Cornell President David Skorton noted that Cornell Law School remains the smallest of the nation's elite law schools, but its reach has become global. "This increased international activity requires space where connections between and across cultures can be made, and can be strengthened and can be enjoyed," he said.

Phase 1 of the project, Skorton said, will "foster the cross-disciplinary and cross-cultural interactions that go with the expanded internationalization and interdisciplinary focus of the dean and faculty." It is hoped that it will be completed by 2014 and will become Cornell's third underground structure; the others are the Carl A. Kroch Library and the Cornel Store.

"And through it all, the Law School will remain a small school of large vision within one of the world's great universities," Skorton said.