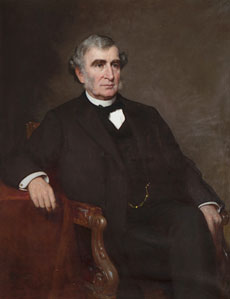 The portrait of that hangs in Uris Library's Class of 1957 Kinkeldey Room was painted by artist Eastman Johnson, commissioned by the Cornell University Board of Trustees and unveiled in 1883. The painting was commissioned "as a tribute of gratitude and respect to a national benefactor," states the wording on a plaque on the painting's original frame.

"Let his name be long remembered," Cornell co-founder and President Andrew Dickson White said of Morrill, who was present at the painting's unveiling. White then noted the 1862 Land Grant Act that carried Morrill's name. "I ask you to look a moment at the passage of that bill. Centuries hence men shall look back upon it as one of the noblest things in American annals."

Morrill was so pleased with the portrait that he had Johnson paint a replica of it for his Washington, D.C., home; that painting is now on display in the U.S. Capitol.

Cornell University Library is celebrating the 150th anniversary of the Morrill Land Grant Act with an exhibit of related photographs, manuscripts and other artifacts from the university archives through Dec. 21 (online version is at http://rmc.library.cornell.edu/morrill/). The exhibit is in both Olin and Uris libraries and paves the way for the library's major exhibition in 2015, which will celebrate the sesquicentennial of Cornell University's founding.