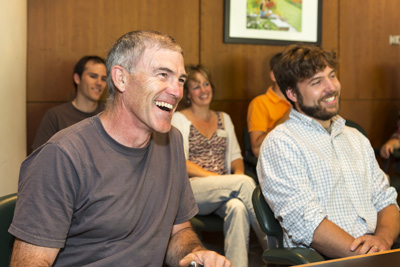 Called to Roberts Hall June 8 from Cornell's Homer C. Thompson Vegetable Research Farm in Freeville, N.Y., Steve McKay, farm manager, thought he was going to learn about recent developments in the United Auto Workers union. Instead, McKay was surprised to find out that he had been chosen as the 178th recipient of the George Peter Award for Dedicated Service.

His supervisor, Glenn Evans, director of operations for the Cornell University Agricultural Experiment Station (CUAES), said that McKay deserved the award because of his ability to do his job ("which involves small-plot research with an incredible variety of plant material and an incredible variety of individuals," Evans quipped); his leadership and teambuilding skills; and his approachability. "He gets the job done and he does it well," Evans said.

In his nomination letter, Evans wrote of McKay's "outstanding ability to collaborate with faculty, field assistants, students, research technicians and the administration" of the CUAES, noting especially his work with local food banks, service on the CUAES Sustainability Action team and "exceptional day-in and day-out service and support" to faculty.

McKay's dedication and service-orientation were reiterated in nomination letters by horticulture professors Robin Bellinder, Donald Halseth and Marvin Pritts, chair of the Department of Horticulture. "He constantly makes suggestions to individuals, departments and college leadership about ways to improve the status quo. ... I doubt there is a single faculty person or graduate student who would not give Steve their highest marks for professionalism and support," Pritts wrote.

Michael Hoffmann, director of CUAES and associate dean of the College of Agriculture and Life Sciences, said that every time he and McKay would get together, McKay would have at least seven new ideas. "He's innovative, he's a leader and he tries new things," said Hoffmann at the event.

In his nomination letter, William Fry, former dean of the faculty and professor of plant pathology and plant-microbe biology, highlighted how McKay tried to save faculty experiments after the flooding of Fall Creek in September 2011, walking the fields in mid-calf mud and creating new irrigation channels to save the plants.

At the event, Betsy Leonard, organic farm coordinator, said that McKay helps students as well as faculty with new projects, and David Becker, technician, said that he has the "most integrity of anyone I've ever known."

Mary Opperman, vice president for human resources and safety services, applauded McKay for his dedication to his work and gave him, on behalf of her division, a copy of Carol Kammen's book, "Glorious to View."

The longest running and most prestigious universitywide, peer-nominated award, the George Peter Award for Dedicated Service is given by the Employee Assembly to staff members who consistently demonstrate a high degree of excellence in doing their jobs and who extend themselves to help others and go above and beyond the normal expectations of their job responsibilities.