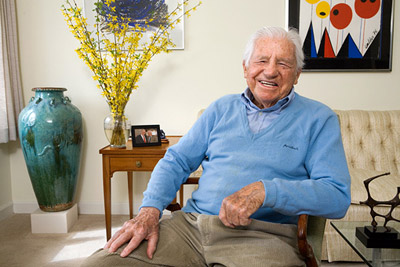 By age 100, most people are slowing down. But M.H. "Mike" Abrams, Class of 1916 Professor Emeritus, continues to write, lecture and publish. His latest book, "The Fourth Dimension of a Poem and Other Essays," will be released by W.W. Norton in time for his 100th birthday July 23.

To celebrate Abrams' lifetime of achievements, Cornell's Department of English has arranged a weekend of activities July 21-22. The public is invited for talks, readings and a lecture by Abrams based on the title essay of his book. 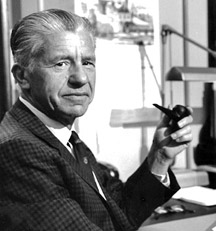 Abrams' "Fourth Dimension of a Poem" addresses the qualities of poems that can be fully experienced only when they are read aloud. Says Larry Lipking, M.A. '56, Ph.D. '62, and an M.H. Abrams Distinguished Visiting Professor for 2012-13, "any number of students have told me over the years how a poem that seemed dead on the page came thrillingly alive when recited with feeling. If we lose that habit, we'll also lose a sense of what poetry used to mean to people, and what it still can mean -- so Mike's current project could hardly be more important."

The celebration kicks off with "A Conversation with M.H. Abrams" at 3 p.m. Saturday, July 21, in Hollis E. Cornell Auditorium, Goldwin Smith Hall. Joined by friends and associates, Abrams will reflect on his career and on the many developments he has witnessed in literary studies. A reception will follow.

Sunday's events begin with "Open Mike for Mike" from 12:30-2:30 p.m. in the A.D. White House. Friends, students, colleagues and admirers will have up to five minutes to pay tribute to Abrams, with the recitation of poems especially encouraged. The talks will be videotaped so Abrams can enjoy them at his leisure. To sign up for a slot, email Karen Kudej.

Abrams' lecture "The Fourth Dimension of a Poem" will be at 3 p.m. Sunday in Hollis E. Cornell Auditorium, Goldwin Smith Hall. Distinguished guest speakers also will give short talks on this theme. A reception will follow.

All events are free and open to the public.

Abrams is one of the most distinguished scholars ever to teach at Cornell. His book "The Mirror and the Lamp: Romantic Theory and the Critical Tradition" (1953) was named one of the 100 most important works of nonfiction of the 20th century by the Modern Library. Notes Nina Baym '57, "the two great tomes that Abrams produced, 'The Mirror and the Lamp' and 'Natural Supernaturalism,' have never become dated or been equaled."

She recalls that Abrams was "everybody's ideal of a professor -- immensely learned but accessible, dignified but kindly, committed to the subject above everything else."

Thousands of students all over the world have been influenced by Abrams, who is the founding editor of the ubiquitous "Norton Anthology of English Literature"; he served as its general editor for 38 years. Many of his former Cornell students have worked with him on volumes of the anthology, including Baym and Lipking. "The range of his interests and the generosity of his responses represent the best of our profession," notes Lipking. "At times when theorists and literary scholars often seemed enemies, he somehow managed to respect them both and to keep the lines of communication open between them."

Birthday tributes to Abrams have been pouring in from all over the country in advance of the July celebration. Harold Bloom '51, the Sterling Professor of Humanities at Yale University and one of Abrams' most celebrated students, recorded a video that will be shown during the weekend program. In an email, Bloom wrote that "in the deep sense I owe my teaching and writing career to Mike. He fathered me during my difficult undergraduate years at Cornell. I was rough, shy, highly self-conscious, and parenthetical. His care and knowledge gave me the control to harness my energy without crippling it."

A website featuring a timeline of Abrams' achievements -- including his work during World War II helping to develop the Joint Army/Navy Phonetic Alphabet known as Able Baker (which includes, fittingly, "Mike" for "M") -- has been created in conjunction with Abrams' birthday celebration. Alumni, colleagues and friends are invited to share messages with Abrams through the website's guest book.