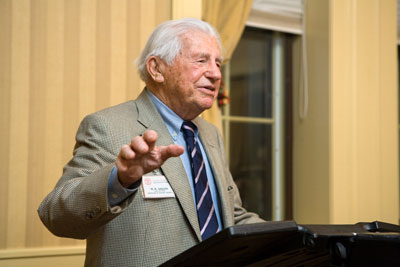 Almost from the time M.H. "Mike" Abrams was hired in 1945 as an assistant professor of English until his retirement in 1983, his name was virtually synonymous with literary studies at Cornell. As an emeritus professor, his influence on the department and literary studies has continued through public talks, conferences and the publication at age 100 of his eighth book, "The Fourth Dimension of a Poem."

Notes Kenneth McClane, Cornell's W.E.B. Du Bois Professor of Literature: "Abrams continues to produce criticism that delights us in its erudition, joyfulness and lucidity. No one argues better for how a poem works; no one, more importantly, argues better for why literature matters."

Abrams has had a direct impact on classrooms all over the world as founding editor of "The Norton Anthology of English Literature," which he edited from 1962 to 2002, overseeing eight editions and numerous teaching guides.

The Norton Anthology exerts a powerful global influence on the teaching of English literature and the literary canon, and has been used by more than 8 million students. The New York Times Book Review noted in 2006 that ever since its initial publication, The Norton Anthology "has remained the sine qua non of college textbooks, setting the agenda for the study of English literature in this country and beyond."

Despite this influence, Abrams denies that the anthology reproduces or even helps establish the traditional canon of English literature. Rather, he writes in his preface to the sixth edition, the writers and works are selected by a "running consensus of its users" and that a vital literary culture "is always on the move."

English Department Chair Roger Gilbert says that Abrams has demonstrated an "unfailing respect for his opponents" during his many years spent critiquing new developments in literary theory. "The ability to explore a range of intellectual positions with sympathy and curiosity while reserving the right to question their claims has been at the heart of much of Professor Abrams' scholarly work."

The legacy of all professors is defined in no small measure by their students; a list of Abrams' includes literary critics such as Harold Bloom '52 ("In the deep sense I owe my teaching and writing career to Mike," he wrote in an email) and E.D. Hirsch '50; novelist Thomas Pynchon '59; and McClane '73, M.A. '74, M.F.A '76. In 2006 Stephen Weiss '57, the late chairman emeritus of the Cornell Board of Trustees, established the M.H. Abrams Distinguished Visiting Professorship to honor Abrams.

"There is a grace in Mike Abrams' prose that is only matched by the grace in the man himself," McClane says. "He is as interested in a poem by Wordsworth as he is in a rap lyric; and there is rarely a day when I do not consult his indispensable 'A Glossary of Literary Terms.'"

Abrams' 1953 history of criticism, "The Mirror and the Lamp: Romantic Theory and the Critical Tradition," ranked No. 25 on the Modern Library's list of the 100 best nonfiction books written in English in the 20th century. His 1971 book "Natural Supernaturalism: Tradition and Revolution in Romantic Literature" won the James Russell Lowell Prize.

"Abrams is distinguished far above his peers in his integration of the details of literary history with the ability to draw out in astonishing and utterly compelling ways the very big picture, elucidating the reigning paradigms for understanding and representing the complexities of human experience, thought and feeling in literary texts," says Daniel Fogel '69, MFA '74, Ph.D. '79, former University of Vermont president.

Peter Lepage, the Harold Tanner Dean of the College of Arts and Sciences, points to the exceptional art collection assembled by Abrams and his late wife, Ruth, with works ranging from Renaissance paintings and pre-Columbian pottery to an Etch-A-Sketch drawing by painter Frank Stella. The collection "holds deep feeling and humor," says Lepage. One of the pieces, a Roman mosaic, hangs in Goldwin Smith Hall, one of dozens of artworks the Abramses donated to the Johnson Museum.