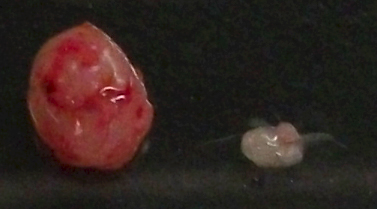 Schimenti Lab
The image shows two tumors in mice from transplanted tumor-prone mammary gland stem cells. The tumor on the left was manipulated to have a reduced amount of NF1 protein (expressed by the NF1 gene), while the one on the right has normal NF1 levels. This preliminary experiment supports a critical role for NF1 in suppressing breast cancer.

A new study shows that the lack of a certain gene occurs in almost 28 percent of human breast cancers, playing a role in some 60,000 breast cancer cases in the United States and 383,000 worldwide this year.

Recent studies have observed loss of the gene NF1 in glioblastoma (an aggressive brain cancer), lung and ovarian cancers, but the significance has been overlooked because it was thought that two copies of the gene (one from each parent) needed to be missing to cause cancer. The study, published online July 30 in the journal Genetics, reports that in most human breast cancer cases where NF1 is a factor, only one copy is missing.

The finding has important clinical implications. It suggests that several existing drugs may be effective in treating breast cancers with missing NF1; it also suggests that the commonly used breast cancer drug tamoxifen could make the disease worse in these specific cancers.

The NF1 gene negatively regulates one of the most important oncogenes -- genes that when mutated or expressed at high levels contribute to turning a normal cell into a cancerous one. This oncogene, called RAS, is involved in signaling inside the cell to control growth. When NF1 is missing or depleted, RAS becomes hyperactivated and can lead to tumor formation.

In the study, Cornell researchers used a mouse model with elevated mutation rates that lead to breast cancer in 80 percent of the mice.

"These mice almost always get mammary tumors, and when we looked at their genomes, nearly all of them were missing this NF1 gene," said John Schimenti, professor of genetics in the College of Veterinary Medicine and the paper's senior author. "There are many big cancer studies that identify the most commonly mutated genes, but they don't prove experimentally that those genes are the drivers of cancer."

In humans, there are many causes of breast cancer, and each patient's cancer has a slightly different set of natural gene variants as well as new mutations in their tumors, so identifying individual genes that drive cancer can be problematic. But the model mice are inbred and get exactly the same tumor every time. "So we've eliminated all the noise," allowing the researchers to identify NF1 as a driver of these tumors, said Schimenti.

In the mouse model, RAS is hyperactivated. Since RAS is one of the most important oncogenes, many drugs have been already developed to interrupt the RAS pathway to treat cancer.

"If NF1 is missing and it is causing cancer by activating RAS, then these drugs may help," said Schimenti. "Therefore, there doesn't need to be any more drug development to test this possibility right now," he added.

The study also suggests that tamoxifen, one of the most common breast cancer treatments, may exacerbate the disease when the missing NF1 is the driver. Another study reported that NF1 protein depletion makes cancer cells resistant to tamoxifen, and tamoxifen-treated patients whose tumors have low NF1 levels had poorer clinical outcomes.

Schimenti and his colleagues plan to test whether they can reverse growth of tumors in mice missing the NF1 gene by inserting a replacement gene. They are also testing how effective RAS inhibitor drugs are at curbing cancer in mice. The paper shows that RAS inhibitors curb growth of these tumor cells in culture.

Marsha Wallace, a graduate student working in Schimenti's lab, is the paper's lead author. Researchers from the University of North Carolina and Sloan Kettering Cancer Center co-authored the study.

The study was funded by the National Institutes of Health, the Empire State Stem Cell Fund, the National Cancer Institute and the Breast Cancer Research Foundation.