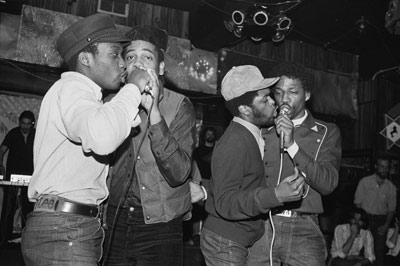 Provided
This photo, which is part of the Joe Conzo archive in Cornell's hip-hop archive, is an example of what's being digitized.

Cornell University Library and the College of Arts and Sciences have awarded 11 new grants to create new digital content in support of visual and interactive learning, teaching and research. Valuable resources ranging from African-American photographs to maps of Southeast Asia will soon be available to researchers, thanks to the Grants Program for Digital Collections.

The 2012 projects and faculty leads include:

This is the third round of annual grants; 2011 awards included digitization of Cornell's coin collection and the creation of a "Divine Comedy" Image Archive for the chief epic poem in Italian literature, among other projects.

The program was developed by the Arts and Sciences Visual Resources Advisory Group, co-chaired by Sturt Manning, professor of classics, and Oya Rieger, associate university librarian for digital scholarship and preservation services. The group oversees the grants program and determines arts and sciences faculty needs for a usable and sustainable visual resources digitization service.

For information on the 2013 grants program, contact dcaps@cornell.edu. Proposals are due in March 2013; awards will be announced in May.