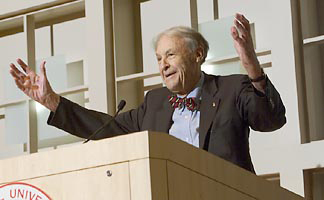 Robert Barker/University Photography
The late Dean Emeritus Robert Beck '42 in Alice Statler Auditorium in 2005 at the launch of the School of Hotel Administration's Beck Center. The auditorium underwent a refurbishment as part of the project.

Dean Emeritus Robert A. Beck of Cornell's School of Hotel Administration (SHA) died July 31 in Redding, Conn. He was 91.

Beck led the school as dean from 1961 to 1981. During his tenure the SHA became known internationally as an important research center, doubled its undergraduate enrollment, launched its Master of Professional Studies program (now known as the Master of Management in Hospitality) in 1973 and fully developed its Executive Education program.

"He was one of the most beloved figures in the history of our school," said Michael D. Johnson, current dean and E.M. Statler Professor of SHA. "He turned over the entire faculty, hiring formally trained academics in place of the operational practitioners of Dean H.B. Meek's era. He emphasized research and raised the school's international profile. He recognized early on the potential of the coming information age, introducing computing to the curriculum and, in tandem with the engineering school, the campus."

After graduating from SHA, Beck served in World War II, losing a leg during the invasion of Normandy in 1944. He returned to Cornell, where he earned his master's degree in education in 1952 and a Ph.D. in psychology in 1954. He joined the Cornell faculty in 1954, where he became a full professor of hospitality financial management in 1960. He was the youngest member of the faculty at age 41 when Cornell President Deane Malott appointed him SHA's second dean.

In 2004 SHA dedicated an addition to Statler Hall as the Robert A. and Jan M. Beck Center, in honor of Beck and his late wife. It includes a lecture hall, two case study rooms, an expanded computer center, a three-story "curtain of glass" and study/meeting rooms. In 1984 friends and family established the Robert A. Beck '42 Scholarship to provide undergraduate scholarships for students enrolled in SHA.

"Bob's loss will be deeply felt by all alumni, faculty and staff who had the great fortune to experience his leadership as dean of the school," Johnson said.

The family is holding a private memorial service. Memorial contributions can be sent to the Jan and Robert Beck Scholarship Fund, in care of Meg Keilbach, director of Alumni Affairs and Development, 174 Statler Hall, Ithaca, NY 14853-6902, or by contacting Keilbach at mhb7@cornell.edu or 607-255-9542. Cards can be addressed to the Beck Family, care of Susan Warner, 7 Magnolia Dr., Madison, CT 06443.