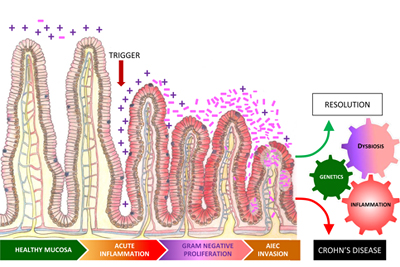 Scientists have long wondered about the role of bacteria in CD. Recent studies have shown marked changes in the composition of the intestinal bacteria in people with CD, leading researchers to ask: Are microbial abnormalities a direct consequence of genetic abnormalities linked to Crohn's and precede and initiate inflammation, or does intestinal inflammation bring on the bugs?

Inflammation, in fact, drives microbial imbalances (dysbiosis) and the proliferation of a specific type of E. coli that is adherent, invasive and found in the ileum, reported Cornell researchers July 31 in PLoS (7[7]). And genetics, they said, do play a role in determining the threshold and magnitude of dysbiosis in response to acute inflammation induced by environmental triggers.

This study also reports that a common therapy directed against intestinal inflammation decreases dysbiosis. In addition, the study found that the lack of a receptor that helps recruit T cells, which are needed for cell-mediated immunity, to the gut also decreases inflammation and dysbiosis, offering a new option for therapeutic intervention.

"Today, remission is our mission," said Kenneth Simpson, professor of small animal medicine at Cornell's College of Veterinary Medicine and principal investigator. "Crohn's disease is a highly complex condition that finds its strength in the combination of negatives: environmental factors, genetic mutations and immune system malfunctions. Ultimately, there may be a cure. Until then, we need to find ways to relieve suffering."

CD is a chronic debilitating inflammatory bowel disease that involves a complex interaction of host genes, the immune system, the intestinal microbiome and the environment. Afflicting more than half a million people in North America, CD can trigger mild to severe diarrhea, fever, fatigue, anemia, reduced appetite and weight loss.

To mirror the complex nature of the disease, Simpson's team designed a study that incorporated inflammatory triggers related to relapse of CD and ileal inflammation. Unlike previous studies that have focused on colonic or fecal dysbiosis, the team focused on ileal dysbiosis, which is prevalent in 70 percent of CD cases. Also novel to this study, the team used a variety of contemporary techniques to generate a comprehensive picture of the composition and spatial distribution of the ileal microbiome. Particular attention was paid to pinpointing the number, pathotype and location of E. coli associated with intestinal inflammation in people, dogs and mice.

"Our findings clearly demonstrate that inflammation drives ileal dysbiosis and proliferation of CD-associated adherent invasive E. coli. Further, in the context of a patient with Crohn's, we found that the host genotype and therapeutically blocking inflammation both impact the onset and extent of ileal dysbiosis. These novel findings are of high relevance to Crohn's disease."

The investigation leveraged the knowledge and resources of researchers in the labs of Erik Denker, Dwight Bowman and Sean McDonough labs. Building on findings in patients with Crohn's disease evaluated by Dr. Ellen Scherl's group at Weill Cornell Medical College, this collaboration shed new light on this debilitating disease.

"It appears that we harbor our own powder keg," said Simpson. "The bacteria are already seeded. It's what controls the relative balance between the different species of bacteria and their numbers, relative proportions, our ability to deal with them, and the cross-talk between the bacteria and host that is important."

This work was supported by NewYork-Presbyterian Hospital/Weill Cornell Medical Center, the Jill Roberts Center for Inflammatory Bowel Disease and the National Institutes of Health.