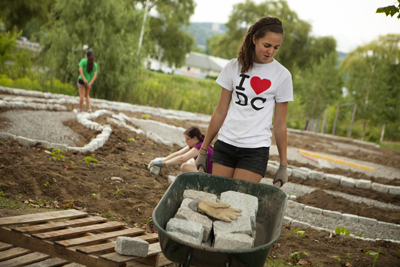 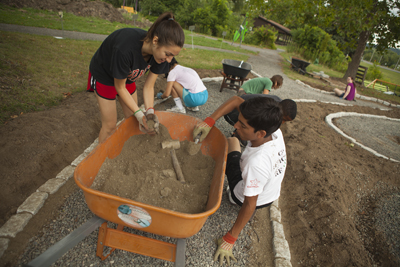 Incoming Cornell freshmen and transfer students had an opportunity to move to Ithaca one week before orientation to carry on Cornell's mission of service. From Aug. 12 to 16, 52 new students participated in Cornell's Public Service Center's Pre-Orientation Service Trips, or POST, by engaging in service activities throughout the community.

The students wasted no time building friendships, leadership skills and getting their hands dirty.

"I participated in it as a freshman, fell in love with the program, and applied to be a leader," said Brandon Taylor '13, who is in his fourth year of POST. "I have been a leader every year since."

As one of 15 POST leaders this year, Taylor returned to Ithaca a few days in advance of the program, in addition to attending training sessions during the past spring semester.

Joining Taylor is first-year leader Sara Hachey '15. "Last year, I participated in the POST program, and I just loved it so much and got so much out of it," Hachey said. Taylor and Hachey led a group that started at the Ithaca Children's Garden, where teams helped establish the new Bulb Labyrinth Memorial Garden.

POST volunteer Hazel Guardado '16, a nutritional sciences major, said of her first day working at the garden: "Right now, we're setting down stones for the pathway. We won't finish today, but there's another group that's coming on Thursday that will finish up. … We do different assignments every day."

According to Guardado, one of the thrills of POST is the opportunity to meet a group of new people before classes begin, to be involved in the community and to get a taste of Ithaca before the academic year commences.

Fellow volunteer Andres Romero '17, an architecture major, said: "In Mexico, we're not very volunteer-oriented. But, being in POST, I want to nurture all of those virtues and all of those values that are here in Ithaca and this program."

According to associate director and POST program coordinator Reneé Farkas, students are volunteering in a variety of service activities at sites throughout Ithaca, including the Cayuga Nature Center, Cayuga Ridge Extended Care, Cornell Cooperative Extension, the Family Reading Partnership, Immaculate Conception School, Ithaca Health Alliance, the Museum of the Earth, Planned Parenthood, the Salvation Army, the Town of Ithaca Public Works Department and the YWCA of Cortland.

Cornell's Public Service Center supports POST, which has provided nearly 900 new Cornell students with a chance to build lasting friendships while establishing themselves as contributing members of the Ithaca community.