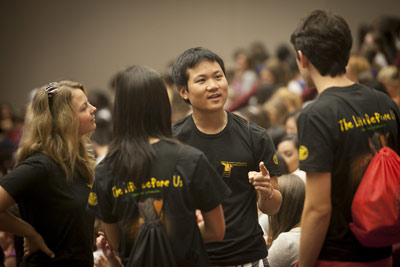 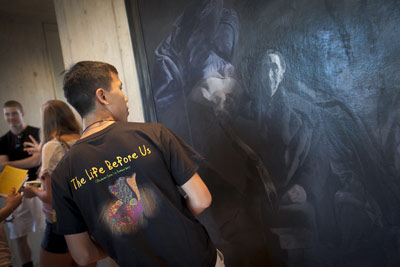 Jason Koski/University Photography
Student talk about "The Life Before Us" in the Johnson Museum.

Consider not only your lives before Cornell but, more importantly, the lives that lie ahead of you here, professor of developmental psychology Stephen Ceci told students Aug. 19 in Kennedy Hall at the New Student Reading Project lecture, "Alternative Views on Deviant Human Behavior," co-presented with Stanka Fitneva, Ph.D. '03, a guest lecturer from Queens University.

The lecture accompanied this year's Reading Project selection, French author Romain Gary's 1975 novel "The Life Before Us," about an orphaned Arab boy named Momo and the Parisian retired prostitute and Holocaust survivor who raised him. In addition to Ceci and Fitneva's lecture, five other simultaneous "Cornell Contexts" presentations were held Aug. 19, introducing students to themes studied at Cornell and related to issues raised by the book, ranging from social inequality and poverty to sexual, religious and cultural identity.

Ceci and Fitneva detailed three key topics in the behavioral sciences that related to the novel: risk and resilience; relationships and attachment; and group relations.

"We see in [protagonist] Madame Rosa a form of sociological deviance," Ceci said. "We see in Madame Rosa and Momo individuals who are living in a world that is largely not French and, yet, in the midst of Paris. They're living in a world with Jews and transvestite boxers from Africa, and Arabs ... but they're largely an enclave of outsiders in society; they're living in the outskirts of society. And that sets you up as a group for all sorts of things, including prejudicial treatment."

According to Ceci, in contrast to this sociological deviance perspective, however, psychologists tend to have an epigenetic, gene-environment interactive approach to deviance. For example, he said, no two individuals in the same environment turn out the same way. Because of variations in both in the serotonin transporter gene, 5-HTT, which is linked to susceptibility for anxiety and depression and in genes that regulate function of the hypothalamic-pituitary-adrenal (HPA) axis, which plays a key role in stress response, two individuals subjected to the same stressors - as in "The Life Before Us" - poverty, abandonment, drug abuse in the family, domestic violence, crimes, etc., one individual may be buffered from adverse consequences, while the other is more vulnerable to them.

Ceci and Fitneva provided data to quantify the effect of these risk factors for deviance on mental illness, IQ and court involvement for adolescents. They concluded that, taking a simplified approach, if an adolescent has fewer than three risk factors, his or her future does not take a substantial hit; however, adolescents like the book's narrator, Momo, with the odds of a successful future stacked against him, were truly lucky to find success.

"I think depicting other people's plight and suffering is extremely important," Fitneva said. "What reading a book like 'The Life Before Us' allows us is to have a contact with the other side in a nonthreatening way, and feeling that we can really communicate with the other side and see their point of view. Hopefully, this is going to reduce the prejudices and ideas we come with when encountering others who, for one reason or another, seem different from ourselves."

With the diversity of the Cornell student body, this is extremely relevant, Fitneva explained to the new students. "Take advantage of all of the opportunities to meet the others."