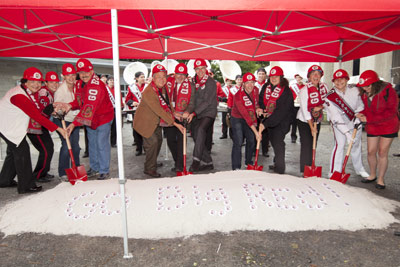 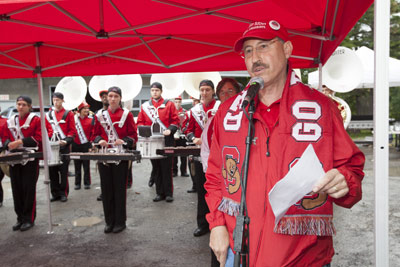 The Big Red Marching Band (BRMB), alumni, university officials and other supporters donned their red hard hats and gathered on Kite Hill Sept. 22 to celebrate the groundbreaking of the band's new building, which should be complete by Commencement Weekend 2013.

"We started thinking about it probably five or six years ago," said David Fischell '75, M.S. '78, Ph.D. '80, a university trustee and band alumnus who spearheaded the project. "[The new building] will have enough room for at least 180 to rehearse indoors," compared with the current band room, which is tight for even 120 people, he said, which was the band's size "when I was here in 1971. With 200 now showing up on any particular day, it's not safe to rehearse in that room."

A piccoloist in the marching and pep bands for eight-and-a-half years, Fischell has deep roots in the BRMB. "The band is family. It's been a part of my family - my brother, wife, both my daughters ... so we are a very connected band family and are extremely excited that with a lot of work we've finally gotten to today, where we can break the ground."

Delgado spoke of the challenges of building a new structure near Schoellkopf Stadium: "It's obviously a very sensitive site because it's next to an iconic Cornell structure, the Crescent. The architects very skillfully developed a design that harmonizes what we already have here. It's made in such a way that it won't compete with the stadium."

While alumni have raised $575,000 in just the past year, the band is still short of the $1 million mark to complete the building. Yet Fischell said he was confident that the band alumni will rally. "We want to get as many Cornell band alums as we can; my goal is 500, to march on the field with the Big Red Band next year when we dedicate the building during Homecoming Weekend."