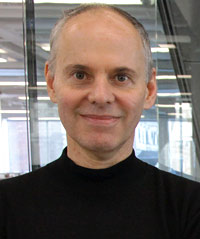 Kent Kleinman, the Gale and Ira Drukier Dean of the College of Architecture, Art and Planning (AAP), has been appointed to a second five-year term as dean, beginning July 1, 2013.

At the request of Provost Kent Fuchs and President David Skorton, the Cornell Board of Trustees' Executive Committee voted to approve the reappointment Sept. 6.

"During his tenure, Dean Kleinman has been the driving force for AAP's major initiatives, and his steady guidance is widely respected throughout his college and among the university's senior leadership. He is much valued for his artistic sensibility as well as his focus on the application of research to the solving of real-world problems," Fuchs said.

Upon coming to Cornell to lead AAP in 2008, Kleinman attended to urgent physical plant issues that had challenged the college's top-ranked architecture program for more than a decade. He helped complete the OMA/Rem Koolhaas design for Milstein Hall, shepherding the project through design development, permissions and community review processes at a time of severe financial constraints. Under his deanship, the capital threshold of $30 million for Milstein Hall was met and exceeded, and the building opened to students and faculty in August 2011.

Kleinman has served as an adviser on key architectural committees on behalf of the university and has helped assure design excellence across a wide range of projects. He is an advocate for an enhanced role for the arts at Cornell, and has helped elevate the visibility of the design arts and sciences on campus and beyond.

At AAP, Kleinman has worked for the improvement of college resources including investments in shops, library, exhibitions, publications, digital infrastructure, student aid and faculty endowments. During his deanship, the Richard Meier Professorship and the Tafel Professorship were inaugurated. He has partnered with the Department of Architecture in securing accreditation for a new graduate professional degree and the reaccreditation of AAP's highly ranked B.Arch. degree. The college significantly fortified its programs in New York City, where architecture, art and planning students can study for one semester and take advantage of formal internships. Kleinman also worked closely with Cornell University Library to secure a future home in Rand Hall for the heavily used and much valued Fine Arts Library. The library was formerly in Sibley Dome, where poor environmental and structural conditions had put the collection at risk.

Kleinman has been an outspoken advocate for design and the arts as a form of inquiry and research. In 2011, with faculty and students from disciplines ranging from engineering and architecture to anthropology and cinema, he supervised an exhibition and symposium on the $2,500 Tata Nano automobile as a demonstration of the intellectual reach of design research and a model for future projects addressing urgent global issues across multiple disciplines.

Kleinman's scholarly focus is 20th-century modernism. His book "The Krefeld Villas: Mies's Haus Lange and Esters" was honored as a Top 10 Book of the Year by the Architects Journal and selected as a finalist for the Top International Book of the Year by the Royal Institute of British Architects. His other books include "Villa Müller: A Work of Adolf Loos," also recognized as a Top 10 Book of the Year; "Rudolf Arnheim: Revealing Vision"; a translation of Jan Turnovsky's quixotic "Poetics of a Wall Projection"; and a recent, co-edited volume titled "AfterTaste: Expanded Practice in Interior Design." He has published numerous articles and reviews and received the 2011 AIA New York State Educator Honor Award.

Kleinman is a faculty fellow at the Atkinson Center for a Sustainable Future, lead dean for the Cornell Council for the Arts, and co-dean of the Baker Program in Real Estate.

He received his professional degree in architecture from the University of California-Berkeley and is a registered architect in California.

"AAP is an extraordinary college with some of the most passionate, creative and dedicated faculty, students and staff I have ever had the pleasure of working with," Kleinman said. "It has been an honor to represent this college at the university and beyond for the past four years, and a double honor to be asked to continue in this role."