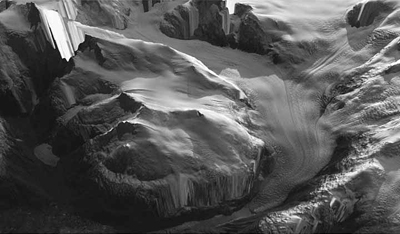 Provided
A perspective view of a glacier on the western side of the Southern Patagonian Ice Field called HPS 12 is shown using data from the Landsat satellite, taken in 2001. On the bottom right, the glacier is visible curving to the left. 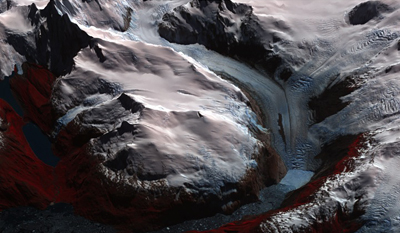 Provided
The color image is the same HPS 12 glacier in 2010 using data from the ASTER instrument onboard the NASA Terra satellite. The glacier retreat is visible in the lower right portion of the image, where the ice leaves off and the water begins. The researchers say the loss of ice thickness is comparable to the height of the Empire State Building.

A little-studied mass of ice in South America is undergoing some big changes: The Southern Patagonian Ice Field lost ice volume at a 50 percent faster rate between 2000-2012 than it did between 1975-2000, according to new analysis of digital elevation models performed by Cornell researchers.

The researchers from Cornell's Department of Earth and Atmospheric Sciences developed a new way of using digital topography maps obtained from a stereo camera on a NASA satellite to draw their conclusions. Their study has been accepted for publication in the journal Geophysical Research Letters, published by the American Geophysical Union.

Between 2000 and 2012, they said, the ice field, which is about three times the size of Rhode Island and is located in the southern Patagonia Andes of Chile and Argentina, was rapidly losing volume at many of its largest outlet glaciers. In most cases, the thinning extended to the highest elevations of the ice field. Overall, the ice field is showing significant mass loss -- about 1.5 times the loss rate recorded between 1975 and 2000 in previous studies.

"Some glaciers aren't doing very much, while some are thinning and losing volume very quickly -- even spectacularly," said research associate Michael Willis, the paper's first author.

The team composed of Willis, graduate student Andrew Melkonian, associate professor Matthew Pritchard and Andres Rivera of the University of Chile made a time series map from 156 elevation models of the area. They used NASA's Advanced Spaceborne Thermal Emission and Reflection Radiometer (ASTER), which is a cooperative Japanese and NASA imaging instrument onboard Terra, the flagship satellite of NASA's Earth Observing System.

The researchers stacked more than 100 of the digital maps, Willis explained, so that a time-stamped pixel on one map is at the same place as a time-stamped pixel on a second map, and so on, like a pile of perfectly aligned pancakes, oldest on the bottom. At any particular place, there is a time series of ice topography changes coded by color.

The results from the technique can be most closely compared to measurements taken by NASA's Gravity Recovery Climate Experiments (GRACE), conducted by a pair of twin satellites launched in 2002 that track mass gained and lost on and beneath the Earth's surface.

GRACE has good temporal resolution but much poorer spatial resolution than the Cornell researchers' ASTER maps. For example, GRACE does not show individual glaciers on its maps, and the GRACE signal does not separate out other factors like the water table filling up or the ground elevation lifting.

The Cornell analysis better isolates the ice field changes only, Melkonian said. "While it's not directly measuring mass, it is isolating the ice field signal, and by making some assumptions about what the density is, we can say how much mass these ice fields are actually losing," he said.

Though it's not nearly as studied as Greenland and Antarctica, the Southern Patagonian Ice Field is the world's second-largest temperate (not frozen all the way through) ice field. The researchers call Patagonia a "poster child" for rapidly changing glacier systems, so studying them could be key to learning how melting cycles work and how they may be affected by climate change. Pritchard said the next step is ground-based measurements to determine the reasons behind the apparent rapid mass loss.

The research was supported by NASA through the Science Mission Directorate's Earth Science Division.