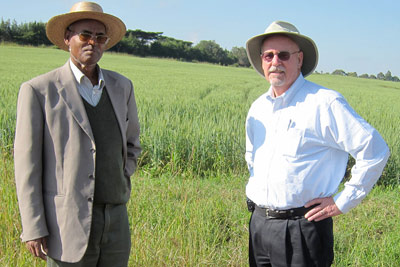 Using data submitted by farmers and scientists, creators of Rust-Tracker, a global cereal rust monitoring system, say they can monitor 42 million hectares of wheat in 27 developing countries in the path of a wind-borne disease so virulent it could quickly turn a healthy field of wheat into a black mass of twisted stems and dried-up grains.

At a symposium in Beijing organized by the Borlaug Global Rust Initiative (BGRI) Sept. 1-4, scientists reported significant progress developing and introducing 20 new varieties of rust-resistant wheat. Seed for the new varieties is being deployed in eight nations for farmers to plant to prevent massive crop loss. But the experts warned that wheat fields in many countries remain largely unprotected from the dangerous pathogen.

"The research being presented at this meeting takes us significantly closer to our goal of protecting the global wheat crop from rust diseases," said Ronnie Coffman, Cornell professor of plant breeding, principal investigator, director of the Durable Rust Resistance in Wheat Project and vice chair of BGRI. "But the vast wheat-growing region that stretches across North Africa and Central Asia all the way to the gateway to China -- the world's largest wheat-growing nation -- is still vulnerable."

Studies presented in Beijing reported on progress with isolating genes that confer resistance to the Ug99 fungus in a wild relative of wheat from Israel and Lebanon. An estimated 85 percent of wheat in production, including most wheat grown in the Americas, Asia and Africa, is susceptible to Ug99 and its variants.

Stem rust can cause farmers to lose entire crops, but a second rust disease is causing severe losses worldwide. Like stem rust, yellow rust (also known as stripe rust) has become an immediate threat with the emergence of new, highly aggressive strains that knock out genetic resistance in many popular varieties of wheat.

In using Rust-Tracker specialists use smartphones and tablets to collect and submit field data that generates "risk maps." Researchers use the maps to determine the path of virulent strains of stem rust, assess the severity of the threat and prepare farmers to resist it.

"The only manageable solution for farmers who cannot afford fungicides when rust hits is to replace their crop with new rust-resistant varieties," Coffman said. "Planting only 5 percent of a nation's wheat fields with seed from resistant varieties would allow replacement of susceptible varieties within a year, if Ug99 should appear.

"It's frustrating," Coffman continued. "We have the technology to prevent a tragedy that could destroy crops in one of the world's most important wheat-producing regions. But the funding is not in place to get enough rust-resistant wheat seed multiplied fast enough and into the hands of the people who need it."

Because China is the largest wheat producer and consumer in the world, threats to its wheat crop or any significant decline in production could have an impact on food security, according to Coffman, who is also director of international programs in the College of Agriculture and Life Sciences.

Wheat is the third leading grain crop in China after rice and maize, with 24 million hectares under cultivation. Yearly production stands at 115 million tons, which is 17 percent of the world's production.

Stripe rust is a growing problem in northwestern China and can cause losses of 10 percent to 50 percent per year.

Stem rust can act like a "biological firestorm," according to Coffman. "Overnight, it can turn fields of wheat into blackened stubble with no grain."

Coffman advocates preparedness and breeding resistance into wheat that is based on more than single resistance genes. He noted that although stem rust is not currently a major issue in China, yellow rust is.

"China's wheat varieties are highly susceptible to both rusts," Coffman said. "Considering their resistance to rusts and other diseases, we would welcome China to be more proactive in screening lines for rust resistance."

Scientists from every region of the world attended the Beijing workshop. Funded by the Bill & Melinda Gates Foundation and the UK Department for International Development, the Durable Rust Resistance in Wheat Project is managed by Cornell.