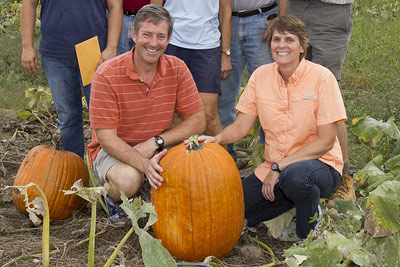 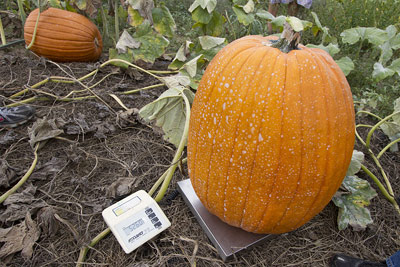 Rob Way
The winning pumpkin tipped the scales at 52.6 pounds.

The great pumpkin arrived in Geneva, N.Y., a little early this year as faculty members, staff and students gathered at the New York State Agricultural Experiment Station (NYSAES) to learn that a couple of Smarts won the station's first pumpkin growing contest.

The summer drought made pumpkin growing challenging this year, but that didn't deter 12 participants from entering the contest, which was created with help from the Student Association of the Geneva Experiment Station (SAGES).

Reiners felt that pumpkins would be a fitting and fun way to raise money for the SAGES scholarship fund, which was established in 2009 to help local high school students pursue agriculture-related college degrees. To encourage participation, SAGES offered half of the funds raised as a prize for the heaviest pumpkin with the other 50 percent going toward the scholarships.

To ensure parity among the growers, each participant paid $20 in early June to receive four pumpkin seeds of the same variety -- Howden Biggie (C. pepo) -- and a 20-by-20-foot plot of land at NYSAES. From there, growers were responsible for all care decisions, including use of fertilizers, frequency of watering and control of diseases, insects and weeds.

Graduate student Lisa Jones, an experienced pumpkin grower, explained that contestants were also at liberty to take special measures to produce the biggest fruit. Some contestants used special shade tents, some used mulching, and others removed smaller pumpkins from the vine to direct all energy into the fruit with the most potential.

"There was certainly a lot of work involved," said Reiners, who also entered the contest. "I drove by this field constantly this summer, but my pumpkins were an afterthought. I didn't really have time to do my plot the way it should've been done."

Jones hosted the weigh-off Sept. 14, several weeks earlier than expected due to the hot, dry summer. "There were two pumpkins that were obviously in contention for the prize," she said. "The heaviest came in at 52.6 pounds, just a quarter of a pound heavier than the runner-up." Jones also explained that pumpkins from this year's crop were in the normal range for fruit size despite the drought conditions.

"Pumpkins of the variety we grew don't normally get above 60 pounds," she said. "The 500-pounders you see are usually a different species called C. maxima. But those are not really true pumpkins; they're actually a type of gourd."

Rebecca Harrison '14 is a writer intern for the College of Agriculture and Life Sciences.