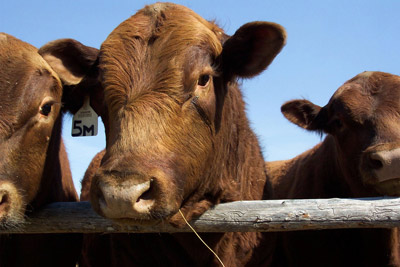 Provided
Cornell is the only institution in the country that offers a new test for salmonella dublin, which can affect cattle and endangers humans.

Salmonella can cause serious disease on cattle farms, killing calves, causing cows to abort, contaminating raw milk and harming humans along the way. As the cattle-adapted strain salmonella dublin creeps into the northeastern United States, veterinarians and farmers struggle to catch the bacteria in time to protect livestock because these bacteria often hide dormant in carrier animals, making the strain particularly hard to diagnose.

For the first time in the United States, a more useful test for salmonella dublin is now available exclusively at the Cornell College of Veterinary Medicine's Animal Health Diagnostic Center (AHDC). Cheaper, quicker, safer and more sensitive, the test detects antibodies rather than bacteria.

Traditional bacteriological tests could only identify the bacteria in sick or deceased animals, missing up to 85 percent of infections in carrier cattle. The new test reveals carriers, helping farmers and veterinarians monitor infection spread over time and track the impact of control measures in ways that were previously impossible.

"We're very concerned about this disease spreading east because it could severely harm animal and human health, as well as the livelihoods of dairies in the region," said Belinda Thompson, senior extension associate at the AHDC. "Salmonella dublin is already common west of the Mississippi River, but it's only recently being recognized in the northeastern U.S. We want to be pro-active now to keep it out of our farms."

In recent years, the AHDC has dealt with several high-morbidity and high-mortality outbreaks of salmonella dublin in New York and other states. To address the problem before it grows further, Bettina Wagner, director of the Serology and Immunology Section of the AHDC laboratory, secured the nation's first U.S. Department of Agriculture permit to import and use the enhanced test.

While salmonella dublin usually doesn't make adults cows very sick, it can wreak havoc on young and unborn calves, particularly in populations like those in the East Coast that haven't been exposed. Its resistance to many common antibiotics severely limits treatment options and, to make matters even worse, it often presents as respiratory disease, throwing off track veterinarians trained to recognize diarrhea as salmonella's telltale sign.

"Veterinarians often think it's something else," said Paul Virkler, senior extension associate at the AHDC. "We've seen newly infected herds in which every single calf in a particular age group dies. We're trying to keep this from getting to baby calves, the life and future of a farm and the animals most at risk."

Also, all salmonella strains affect humans and most other vertebrates and can jump between species. Even carriers that don't seem sick can shed bacteria, and people, companion animals and other livestock can pick up the infection through contact with any bodily excretion.

Prior to the new test's release, testing had to be done animal by animal. The new antibody test can use milk samples straight from bulk milk tanks to find whether a herd has been exposed. It can also work with blood samples and diagnose individuals, helping keep unexposed herds infection-free by removing infected animals and pre-screening new animals farmers are considering buying.

"Herd managers can take preventative measures and help control the infection's spread by isolating sick calves, pasteurizing milk, managing cattle movement and improving hygiene," said Thompson. "But to see if any of this is working, they need a tool to monitor success. We didn't have that until now. This test will let us learn about the prevalence of salmonella dublin on the East Coast and hopefully nip it in the bud."

Carly Hodes '10 is a communication specialist at the College of Veterinary Medicine.