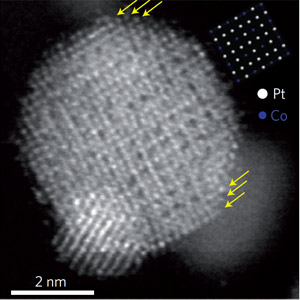 Provided
Electron microscope image of a platinum-cobalt alloy nanoparticle, showing the arrangement of the metal atoms into an ordered lattice. A smaller particle overlaps the large one at the bottom. Yellow arrows indicate the three layers of platinum atoms on the surface. 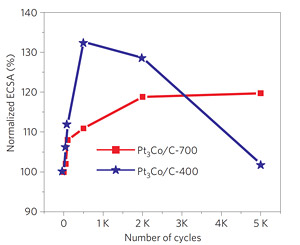 Provided
Ordered nanoparticles (red line) maintain their surface area over time, keeping catalytic activity steady, while particles made of the same alloy without an orderly structure (blue line) degrade. (Both get a boost at the start as the surface cleans itself.)

Fuel cells, which convert fuel directly into electricity without burning it, promise a less polluted future where cars run on pure hydrogen and exhaust nothing but water vapor. But the catalysts that make them work are still "sluggish" and worse, expensive.

A research team at the Cornell Energy Materials Center has taken an important step forward with a chemical process that creates platinum-cobalt nanoparticles with a platinum enriched shell that show improved catalytic activity. "This could be a real significant improvement. It enhances the catalysis and cuts down the cost by a factor of five," said Héctor Abruña, the E.M. Chamot Professor of Chemistry and Chemical Biology, senior author of a paper describing the work in the Oct. 28 issue of the journal Nature Materials. Co-authors include Francis DiSalvo, the John Newman Professor of Chemistry and Chemical Biology, and David Muller, professor of applied and engineering physics and co-director of the Kavli Institute at Cornell for Nanoscale Science.

In a hydrogen fuel cell, a catalyst at one electrode breaks hydrogen atoms into their component protons and electrons. The electrons travel through an external circuit to create an electric current to the other electrode, where a second catalyst combines the incoming electrons, free protons and oxygen to form water. In current commercial fuel cells, that catalyst is pure platinum, which is scarce and expensive. Researchers have tried substituting platinum alloys with varying degrees of success. Previously, the Cornell research team created nanoparticles of a palladium-cobalt alloy coated with a thin layer of platinum that worked like pure platinum at lower cost. Forming the catalyst as nanoparticles -- typically about 5 nanometers in diameter and distributed on a carbon support -- provides more surface area to react with the fuel.

Computer simulations of the catalytic reaction predicted that there should be an increase in catalytic activity if the platinum atoms are pushed a bit together or "strained," as Abruña describes it. Deli Wang, a post-doctoral researcher in Abruña's group, devised a new chemical process to manufacture nanoparticles of a platinum-cobalt alloy that included an annealing (heating) step, where the randomly distributed atoms in the alloy form an orderly crystal structure. Rather than just being jumbled together, the metal atoms arrange themselves in an orderly lattice. Platinum atoms layered onto these particles line up with the lattice and are pushed closer together than they would be in pure platinum, with the resulting "strain" enhancing the catalytic activity. Huolin Xin, a graduate student in Muller's group, used a scanning tunneling electron microscope to confirm the structure.

In preliminary tests the new nanoparticles to showed about three and a half times higher catalytic activity (measured by current flow) than similar particles with a disordered core, and more than 12 times more than pure platinum. The new catalysts also are more durable. Fuel cell catalysts lose their effectiveness as platinum atoms are oxidized away or as nanoparticles clump together, deceasing the surface area they can offer to react with fuel. After 5,000 on-off cycles of a test cell, catalytic activity of the ordered nanoparticles remained steady, while that of similar cobalt-platinum nanoparticles with a disordered core rapidly fell off. The ordered structure is more stable, Abruña said. The platinum skin may be bonded more strongly to the ordered core than to the disordered alloy, so it would be less likely to fuse with the platinum on other nanoparticles to cause clumping. "We have not gone beyond 5,000 cycles but the results up to that point look very, very good," he said.

The Energy Materials Center at Cornell is an Energy Frontier Research Center funded by the U.S. Department of Energy.