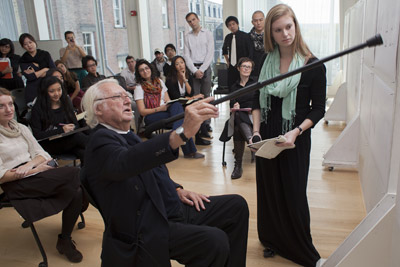 In a whirlwind afternoon that included a gallery talk, a studio class visit, a building tour and a public lecture, world-renowned architect Richard Meier '56, B.Arch. '57, returned to Cornell Oct. 17 to reflect on a half-century career that catapulted him to the pinnacle of his profession.

Meier, whose iconic building designs include the Getty Center in Los Angeles, is the only Cornellian awarded the Pritzker Prize for Architecture, considered the field's highest honor. Since receiving the prize in 1984, Meier has been recognized with the American Institute of Architects Gold Medal and awards from the Japanese and French governments and the Royal Institute of British Architects.

"He's a giant. We are all basking in the glow of his legacy," said Kent Kleinman, the Gale and Ira Drukier Dean of the College of Architecture, Art and Planning. "For him to come back and share his life as an architect with the next generation of architects is really an incredible privilege."

Meier's visit began with a discussion of a facet of his creativity never before seen in public: his work in the medium of collage. At the exhibition "Richard Meier: Artistic Conscience" in the John Hartell Gallery in Sibley Dome, he discussed a displayed series of collages of ticket stubs, decals and newspaper clippings produced in sketchbooks during his world travels.

"It's a pleasure for me to share these collages with you. I usually don't," Meier told a group of 100 students and faculty at his gallery talk. "It's a private thing that I do. My architecture is public. This is private."

The colorful, spontaneous collages represent a sharp contrast with the ordered, geometrical consistency and stark whiteness of Meier's architecture. Students repeatedly asked him about his trademark color choice throughout the day.

During a visit to a graduate studio class in Milstein Hall, Meier explained his insistence on a monochromatic style. "Architecture is about light. The whiteness reflects and refracts the light," he said. "Look outside at the beautiful autumn trees. There's nothing architecture could do to be as beautiful as that."

The studio Meier visited is co-taught by Assistant Professor Caroline O'Donnell, who was appointed the first Richard Meier Professor of Architecture in 2011. O'Donnell had asked her students to produce two drawings of a building Meier had designed. On Wednesday they presented their drawings to Meier, and he offered feedback on their interpretations.

"It was daunting both for myself and the students, but Richard really liked the drawings and some of the ways the students had interpreted his process," O'Donnell said.

Whitney Liang, M.Arch. '15, presented two drawings on Meier's design for Weill Hall, Cornell's four-year-old building for the life sciences. Hong-Yeol In, M.Arch. '15, said that having Meier visit the class helped him understand how the architect felt about his projects. "Having a conversation with an architect for about five minutes is better than spending a semester reading about him," In said.

During a tour of AAP with Kleinman, Meier said that Milstein Hall has "the kind of openness that fosters interchange among the students and faculty, so I'm very impressed. Other schools [of architecture] don't really have the kind of openness and transparency that you have here." Meier also visited the revamped traditional and digital shop facilities in Rand Hall.

Later in the day, Meier lectured to a capacity audience in the Abby and Howard Milstein Auditorium. Augmented by dramatic photographs and renderings highlighting his firm's work, Meier shared insights into decisions on the placement of buildings and the complicated interplay between the built form and the existing conditions of a site.

Sherrie Negrea is a freelance writer.