"What [our veterans] do during times of peace is as important as what [they] do during times of war," said retired U.S. Air Force Maj. Gen. Michael Hall '68, in a Nov. 9 address at Sage Chapel in honor of Veterans Day. Hall is a Cornell trustee, former president and executive director of the Wings of Eagles Discovery Center, and a member of the Tompkins CEO Roundtable.

"The 11th day of the 11th month was meant to honor those who face and experience the horrors of war. Though it would be best if these fallen men and women could witness our thanks, unfortunately, this is not the case," said Hall. He said that the fallen men and women are "an inspiration, as those who have tried their best to serve their country," and he encouraged the young brigades before him to be strong and do the same. 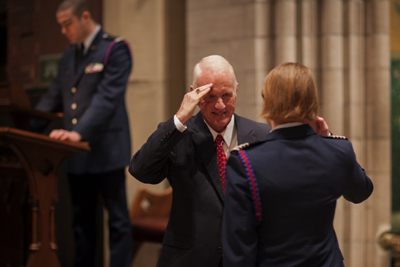 He also spoke of the efforts that members of the armed services make, not only on the battlefield but also at home, their hours of training, and the constant valiance, discipline and selflessness required to persevere through these activities.

Recalling Cornell's long and prestigious military history since the founding of the university, Hall encouraged members of the current brigade to exert their maximum effort and remain motivated during each training exercise, reminding them that "only if [they work hard] during times of peace can [they] be great during times of war."

While at Cornell, Hall was a member of the Air Force ROTC. He has served in numerous deployments, culminating with Wing Command of the 174th Tactical Fighter Wing and Theater Air Liaison Officer of the Air Campaign in the Kuwaiti Theater of Operations during the 1991 Gulf War.

The event was sponsored by Cornell's Office of Workforce Diversity, Equity and Life Quality and the university's ROTC programs. It was hosted by the Cornell ROTC Brigade and the Veteran Colleague Network Group.

Lauren Cue '15 is a writer intern for the Cornell Chronicle.