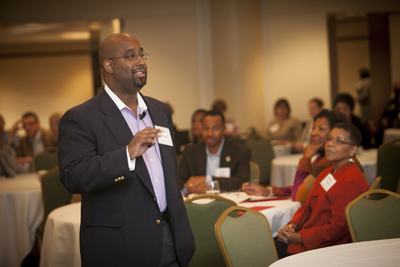 While many organizations hire a chief diversity officer (CDO) to lead and coordinate their diversity efforts, Cornell takes an approach that more closely mirrors the climate of inclusion the university seeks overall, said conference speakers at the 14th annual Diversity Update Conference Nov. 12.

"We are using diversity to promote diversity," said Lynette Chappell-Williams, associate vice president for inclusion and workforce diversity, in describing the "Toward New Destinations" initiative the university launched earlier this year.

Laura Brown, vice provost for undergraduate education, noted that in a "complex institution like Cornell," this approach might be more effective than having a single CDO. She added that the menu of specific initiatives in the Toward New Destinations document distributes responsibility for completing the diversity efforts among the university's divisions, which makes those initiatives more inclusive of all of campus. At the central level, for example, senior leaders are not just supporting the endeavor overall, but are personally responsible for the success of initiatives within their own units.

As a result, they are engaged in the endeavor: "They speak to the press, the trustees, the alumni and the public about this project from direct knowledge and involvement," Brown said.

The 158 initiatives chosen by 27 colleges and units are inclusive in their scope: 38 percent of the initiatives address staff; 21 percent undergraduates; 20 percent faculty; 14 percent graduate students; 3 percent postdocs; and 4 percent off-campus partners or members of the extended community of alumni, parents and others. They also are spread among the four core principles of Toward New Destinations: 32 percent address composition, or the demographic makeup of people from diverse groups who are hired, admitted or retained; 32 percent address matters of inclusion, creating a campus climate that makes people feel included; 22 percent address professional or academic achievement, including rates of graduation; and 14 percent address engagement, or the personal identification that members of the Cornell community feel with the university.

In his closing address, Sonel Shropshire, president of The Academic Network Inc., reminded participants that unconscious bias, often rooted in tradition, can be subtle and yet still undermine efforts to build an inclusive environment. Perseverance is needed to institute diversity, he said.