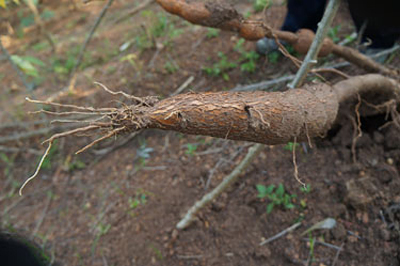 Provided
Cassava, a tough woody plant, is predicted to be one of the few crops that will benefit from climate change. Cassava roots are processed and eaten by 500 million people a day in Africa.

To improve the productivity of cassava -- a rough and ready root crop that has long been the foundation of food security in Africa -- and plant breeding in sub-Saharan Africa, the Bill & Melinda Gates Foundation and the Department for International Development of the United Kingdom have awarded Cornell $25.2 million to host a five-year research project.

"Partners on the Next Generation Cassava Breeding project will use a state-of-the-art plant breeding approach, known as genomic selection, to improve cassava productivity for the 21st century," said Ronnie Coffman, Cornell professor of plant breeding and genetics, director of International Programs and the grant's principal investigator.

Typically, it takes researchers almost a decade to develop a new cassava variety. Genomic selection can shorten breeding cycles, provide more accurate evaluation at the seedling stage and give plant breeders the ability to evaluate a much larger number of clones without the need to plant them in the target environment. Using genomic selection, new releases of cassava could be ready in as little as six years.

"Increased support for strengthening the research capacity in Africa and harnessing novel technologies are critical to improving overall agricultural productivity and food security for poor people," said Yona Baguma, project coordinator for NaCRRI, who aims to unlock the potential of cassava in Africa and mobilize a new generation of cassava growers. 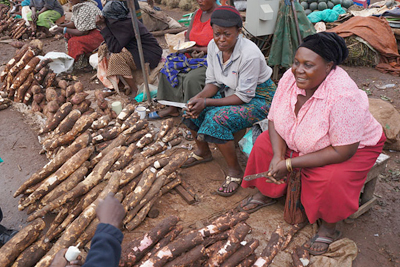 H.Tufan/International Programs
In Africa, cassava is typically considered a "woman's crop" - primarily grown, processed and sold by women. Here, it is being sold in a market in Kampala, Uganda.

"The Next Generation Cassava Breeding project provides a great opportunity for us to harness the power of modern science for faster delivery of best-bet cassava varieties for smallholder farmers," said Chiedozie Egesi, assistant director at NRCRI and head of cassava breeding, who works to biofortify cassava with micronutrients to make it more nutritious.

"[The project] will give breeders in Africa access to the most advanced plant breeding technologies to deliver improved varieties to farmers more rapidly," said Peter Kulakow, cassava breeder and geneticist with IITA. "This project will ensure that cassava genetic research is on a par with other top food crops such as wheat, rice, maize and potato."

Africa's small farmers produce more than half of the world's cassava, about 86 million tons from over 10 million hectares. The tough woody plant is predicted to be one of the few crops that will benefit from climate change. It requires few inputs and can withstand drought, marginal soils and long-term underground storage. Cassava is a cash crop as well as a subsistence crop, and the storage roots of this perennial shrub are processed, consumed freshly boiled or raw and eaten by people as well as animals as a low-cost source of carbohydrates. No other continent depends on cassava to feed as many people as does Africa, where 500 million people consume it daily.

The cassava team at Cornell also includes scientific leader Jean-Luc Jannink, research geneticist with the U.S. Department of Agriculture and adjunct professor of plant breeding and genetics, and Tim Setter, chair of the Department of Crop and Soil Sciences. The partners will share cassava data, expertise and information on a website http://www.cassavabase.org, which was developed by Lukas Mueller of BTI.

In addition to using the latest genomic information from cassava sequencing to improve productivity and yield, project partners will incorporate cassava germplasm diversity from South America into African breeding programs, train the next generation of plant breeders and improve infrastructure at African institutions. They will also hold awareness-building workshops for farmers, scholars, researchers and policy makers.