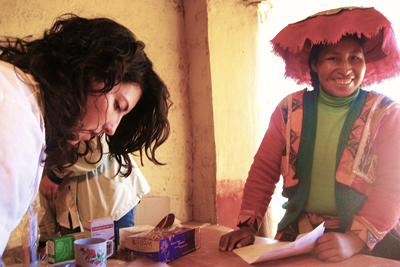 Division of Nutritional Sciences
As a volunteer in the summer of 2008, Lauren Braun '11 fills a prescription in a makeshift rural pharmacy in Peru.

One grant awarded to Jeremy Thompson in the Department of Plant Pathology and Plant-Microbe Biology will fund a project that takes advantage of new technology to rapidly determine the structure of RNA in viruses, which may lead to a new method for developing virus-resistant plants. Thompson, a research associate in the lab of Keith Perry, associate professor of plant pathology, will work with Perry to uncover new targets for plant virus resistance and with Julius Lucks, assistant professor of chemical and biomolecular engineering, who has developed new RNA structure mapping technology.

Viruses are known to use their RNA to hijack the replication machinery in host cells to make more copies of the virus. The researchers hope that determining the RNA structure will reveal plant proteins that are involved in viral replication.

"We want to try and map the structure of viral RNA, map the way it folds, and then we can potentially identify host proteins that are involved in virus replication and function," said Thompson.

Once these plant proteins are identified, the researchers will look for genes that code for those proteins and try to alter their expression within the plant. "If we can affect the amount of protein involved, we can potentially hinder virus replication," Thompson added. Using refined engineering methods to knock out or silence such protein-coding genes, the researchers may then create lines of virus-resistant plants.

The researchers will begin by examining viruses and host proteins in bean, tobacco and arabidopsis; bean, because of its importance as a staple in developing countries and the latter two because their genomes have been fully sequenced.

The one-and-a-half year, $100,000 grant represents a first phase that, if successful, allows the team to become eligible for phase two and an additional $1 million.

As the main objective of the Gates Foundation Grand Challenges in Global Health initiative is to improve the quality of life in developing countries, this project aims to "improve resistance against particular diseases for small-holder farmers, with all intellectual property being open to developing countries," Thompson said. Plant viruses lead to billions of dollars in agricultural production losses each year.

Lauren Braun '11 received a $100,000 grant to field-test in Peru a simple, inexpensive immunization-tracking bracelet for babies. Braun conceived the idea after spending the summer of 2008 as a volunteer at two rural health clinics in Peru, and she presented it on campus in the Entrepreneurship@Cornell's 2011 Big Idea Competition.

The World Health Organization estimates that globally 1.5 million children die of vaccine-preventable diseases each year, and one in five children will die from such a disease before age 5.

Braun formed the nonprofit Alma Sana Inc. (Spanish for healthy soul) to manufacture and distribute the bracelets, which bypass language barriers and illiteracy by using symbols to show mothers the vaccinations their children need and numbers to show when they are due. The bracelet is to be worn by a child from birth to age 4, with the goal that more children will live to age 5.

A paper reminder system failed, Braun reports, because children are not brought in for their vaccinations and stored vaccine spoils and must be discarded, increasing costs. The bracelet also tells public health workers which vaccination each child needs.

The Gates Foundation initiative seeks new approaches to optimize immunization systems. In 2010, they said, a quarter of a million doses of pentavalent vaccine, costing nearly $1 million, expired in one country's central store because the system charged with delivering them was not ready to manage it.