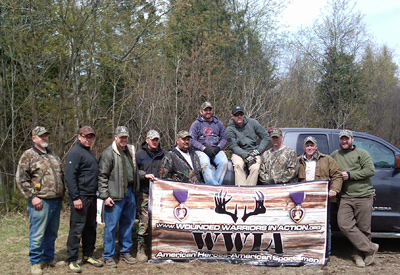 Provided
Keith Tidball and other veterans participate in a habitat restoration activity at Camp Hackett in northern Wisconsin in April, organized by the Wounded Warriors in Action Foundation.

As soldiers return from war, they may need medical care, counseling and help finding new jobs. But they also need access to nature, says Keith Tidball, a senior extension associate in the Department of Natural Resources.

Extensive research supports the value of green space in urban contexts and of nature in helping people with a variety of disorders. Tidball, an Army veteran, wondered what restorative powers nature might hold for soldiers and other trauma victims.

"There's no 'magic green pill,'" Tidball said, "but this is clearly an untapped, important resource."

"Greening in the red zone," as Tidball calls this concept, includes such activities as tree planting, community gardening, hunting and time alone in nature. He is researching the validity of the concept as principal investigator for an $85,600 federal grant, "Returning Warriors: A Study of the Social-Ecological Benefits of Coming Home to Nature." Among others, Tidball is working with veterans' organizations and the Army's Fort Drum in northern New York to promote greening practices.

"Fort Drum is a huge base. It would be 70 percent Adirondacks if not for the occasional tank rolling through," Tidball said. "Unfortunately, there are many, many issues limiting soldiers' activities on base. We're trying to open up their awareness and opportunities."

Tidball first realized the importance of nature in his own life when he moved from rural Minnesota to Detroit in middle school. Oppressed by endless views of dilapidated parking lots, Tidball searched for any bit of nature.

"Any little creek or tiny patch of woods or even some of the tributaries of the famously polluted rivers -- if they had anything that had imprinted on my mind as nice, green space, I would seek those out," he said.

In his research, Tidball has demonstrated a role for nature in helping people recover from war, political upheaval and natural disasters. And yet, in the immediate aftermath of such traumas, green space is rarely considered by policymakers and planners.

"In the effort to hurry up and show progress, what gets overlooked seems to be the human-nature relationships in the people and places affected," he said.

For example, after Hurricane Katrina devastated New Orleans, authorities were so eager to restore power, they cut down or damaged many trees on streets to access to power lines.

"That ended up being even more devastating for some people than the flooding," Tidball said. "Yes, we need to hurry up and get the lights on, but there may be ways to do that without denigrating the natural environment and our relationship with it, which is so critical for recovery after these kinds of traumatic events."

Tidball also studied Soweto, South Africa. In the power vacuum that followed apartheid's end, one area of Soweto became notorious for its violence. It included a dump filled with mountains of old tires. Thugs created a ritual of "necklacing" their opponents -- placing a tire around someone's neck and lighting it on fire.

To combat the violence, a group of youth in the area slowly reclaimed the dump and transformed it into community gardens. "And little by little this mountain of horror came to be known as a mountain of hope," Tidball said.

Within the past decade, "greening movements" have become more common and politically acceptable, Tidball said. Individuals, universities and governments are all paying more attention to the importance of nature in health and well-being.

"They're all kind of flowing together like tributaries converging into a river of activity on this idea. It remains to be seen, however, whether there's enough current in this river to change business as usual."