A memorial service celebrating the life of macroeconomist Uri Meir Possen, Cornell professor of economics and former chair of his department, will be held Sunday, May 11 at 4 p.m. in G10 Biotech, 526 Campus Road, Ithaca, N.Y. A reception in the atrium will follow. RSVP to Vicki Sussman at 607-255-3471 by April 25.

Macroeconomist Uri Meir Possen, Cornell professor of economics and former chair of his department, died Dec. 12 at Upstate Medical Center in Syracuse. He was 70.

An expert in public finance and monetary economics, Possen worked in the area of Keynesian economics. He frequently collaborated with public sector economist Pierre Pestieau, a former assistant professor at Cornell and now professor emeritus at the Université de Liège, Belgium.

"They did interesting work on the intersection between the broad effects of policies on the macroeconomy and on public sector institutions and mechanisms -- how you get a government policy implemented as well as its broader effects on the economy," said Richard Schuler, professor emeritus of economics, who knew Possen for more than 40 years. 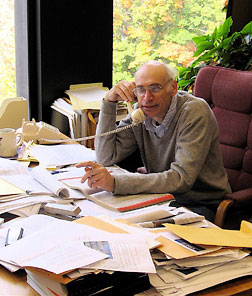 Franklin Crawford
Uri Possen in his Uris Hall office in 2007.

Possen is survived by his wife, Rhoda, senior lecturer in the Department of Romance Studies; a son, David; a daughter, Rachel; and extended family. A graveside funeral was held Dec. 13 at Lakeview Cemetery, Ithaca. Shiva will be observed by the family through Dec. 20 at their home, 117 Clover Lane, Ithaca, with traditional minyanim at 7 a.m. and 4:15 p.m.